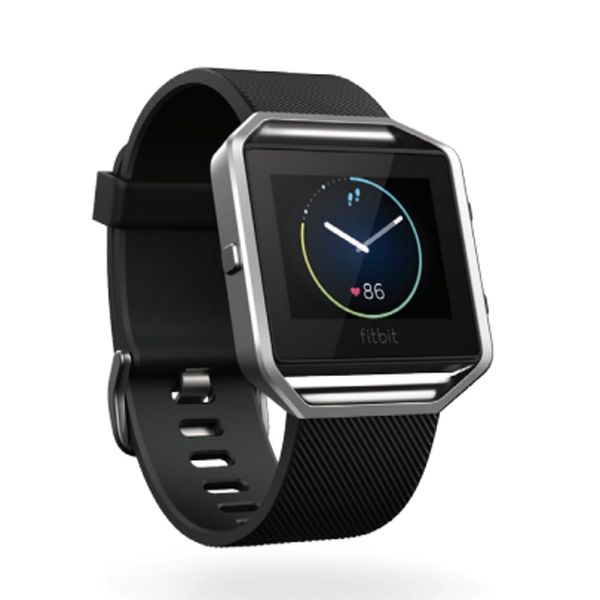 Tomorrow is the first official day of CES 2016, but today Brit + Co is on the ground in Vegas learning all the most exciting news tech companies are rolling out — especially in the world of wearables. Fitness tech was not exactly a thing until the Fitbit came around in 2007. According to CEO James Park, when they first introduced the Fitbit to Best Buy, the tech retailer didn’t even have a real space for wearables. They actually tore out the DVD section to make room. LOLOL!

In nine short years, we’ve seen quite a few other wearables emerge, including the Apple Watch, Baublebar + Jawbone’s fashion wearable collab and more, but despite being the pioneer of the field, we know Fitbit has never lost its edge. On Christmas Day, it was still the most downloaded free smartphone app in the App Store. Now the brand is back with a hot new product that is going to change the wearable game. To put it mildly, Apple better watch out.

It’s called the Fitbit Blaze ($199) and it’s essentially a blend of the O.G. Fitbit + the Apple Watch. Rather than offering a fitness wearable or a smart watch, it puts equal weight on both features, which is why CEO James Park introduced it to the audience as a smart fitness watch. At first glance, the Fitbit Blaze could almost pass as the more octagonal cousin of Apple’s own flagship watch — it too comes with a larger interactive screen and several band options, including multiple elastomer colors, leathers and even a stainless steel chain link. It also has push notifications for calls, texts and calendar alerts, but that might be where the similarities end.

The key difference is that the Fitbit Blaze is interchangeable, so you don’t have to commit to just one style. YAAAAS. “It’s comfortable, lightweight and above all, beautiful.” says Chief Business Officer Woody Scal. “You can put it in a sweatproof band when you’re working out, then change it to a leather strap for a night out.” Yeah, rubber doesn’t exactly go with the LBD, so this is kind of amazing.

And remember when we said this is equal parts smart watch and fitness tracker? Fitbit acquired Fitstar, NFL star Tony Gonzalez’s top-of-the-game fitness app, in March of 2015 and has fully integrated the app into the Blaze. You can actually watch a little figure demonstrate a workout directly on your watch, plus the gadget comes loaded with Fitstar’s three breakout mini-workouts: “Warm It Up,” “7-Minute Workout” and “10-Minute Abs.”

And here might be the best news we’ve heard since we landed in this Nevada desert strip. The Fitbit Blaze will last up to five days and five nights on a single charge. Battery life, form and function? If you’re chomping at the bit to know when you can get your paws on this piece of tech, you can actually pre-order it now. It’ll hit shelves worldwide in May.

There’s literally no excuse left to stay on your bum all day.

Stay tuned here and @BritandCo for all the news from CES 2016!