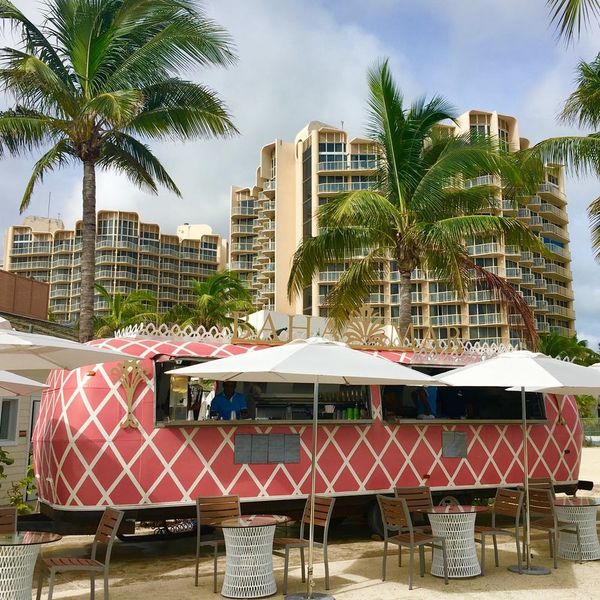 Sit-down restaurants have nothing on these grab-and-go gastronome gems popping up in cities like Miami, Brooklyn, Austin, New Haven, and Seattle. You can enjoy everything from tacos and hot dogs, lattes to ice cream — and the best part is, you don't need a reservation. Click through to see 11 of the best places to get your meals on wheels.
Mister Dips, Brooklyn, NY: Stationed outside of the hipster-chic boutique hotel, The William Vale in Williamsburg, Brooklyn is Mister Dips, a retrofitted 1974 Airstream serving up comfort-style eats and treats like burgers, waffle fries, and dairy dips. And we're not talkin' soggy boardwalk bites either: The power players that put this whimsical culinary concept on the map are none other than chef Andrew Carmellini, executive chef Anthony Ricco, and pastry chef Jason Casey, so you know you're getting the good stuff. There are also killer views of the Manhattan skyline from Vale Park, which means you should go early and stay for the sunset. (Photo via The William Vale)
Tincan Coffee, Lexington, KY: What's a better way to start the day than by getting your caffeine fix outside this cute coffee shop on wheels in Lexington, Kentucky? Tincan's mission is all about brewing great coffee with passion using the best local ingredients, but they win bonus points for doing it all out of a 1957 aluminum “canned ham” trailer. #Obsessed (Photo via Tincan Coffee)
Soursop, Austin, TX: With prime real estate in South Austin’s The Yard district (adjacent to St. Elmo Brewing Company), Soursop keeps locals and tourists alike coming back for their “Asian drinking food." Inspired by street eats from Thailand, Vietnam, Malaysia, and Indonesia, their playful dishes include roti tacos, a buttermilk-fried chicken sandwich seasoned with green curry, fermented green tomatoes, burnt scallion aioli, and Indonesian-influenced sambal wings. Nom nom nom. (Photo via Nicolai McCrary)
48 Urban Garden, Athens, Greece: Aside from dining at the actual Acropolis, this is the closest you'll get to a one-of-a-kind al fresco experience under the stars in Athens. 48 Urban Garden has indoor and outdoor seating areas, as well as an onsite garden that produce veggies, fruits, and herbs to go into their seasonal, organic, and locally sourced meals. Their Airstream trailer converted into a kitchen is the focal point, so be sure to snag a spot near it to watch all the action. (Photo via 48 Urban Garden)
W South Beach Taco Truck, Miami, FL: Five-dollar pulled pork and fish tacos, thirst-quenching margs, and craft cervezas right on South Beach? You can't beat a deal like that, friends. After checking into hot spot hotel the W South Beach, ditch your room for the sand and get in line at their beach-casual Taco Truck out back — you just might end up staying all day. (Photo via W South Beach)
Ambrose Lobster and Bites, New York, NY: Here's where you go to make #NeverEndingSummer a reality... in NYC. Lobster rolls, hot dogs, beer, and cocktails are up for grabs (and Instagrams) at Ambrose Lobster and Bites in the newly redesigned Seaport District at Front Street Food Market. (Photo via Ambrose Lobster and Bites)
La Centrale, Miami, FL: You'll feel like you're vacationing in Italy when you swing by the Italian granita cart at La Centrale, Miami’s first food hall, opening this December at Brickell City Centre. The throwback rickshaw decked out in blue and yellow stripes, with an attached bike to get around, is exactly what you need in your life. Oh, and the ornate silver chillers they serve the granita in are pretty photogenic too. (Photo via La Centrale)
El Jefe, Nassau, Bahamas: Sure, you can head to the Bahamas for the beaches, but another reason to go is for El Jefe, the oceanfront Airstream at Grand Hyatt Baha Mar. Not only is it cute AF (and surrounded by palm trees, umbrellas, and wicker tables), but the views of Nassau’s idyllic Cable Beach and the traditional Mexican sopes are next level. (Photo via El Jefe)
Skillet, Seattle, WA: What started over 10 years ago as a vintage Airstream trailer serving casual diner fare is now a full-fledged business, with four brick-and-mortar restaurants around Seattle and a cookbook to boot. Don't worry, though; Skillet still operates its original food truck. Order signature items like the burger and poutine, or switch it up with a kale caesar with boquerones. (Photo via Skillet)
Hey Cupcake!, Austin, TX: Austin's Hey Cupcake! may resemble a futuristic spaceship of sorts, but make no mistake — it's full of gourmet confections that will put you on a cupcakes-only diet. Try the "Pumpkinator" with pumpkin spice cake, cinnamon sugar, and cream cheese frosting, because fall. (Photo via Hey Cupcake!)
Barefoot BBQ, South Walton, FL: If your BBQ philosophy involves eating fall-off-the-bone ribs under the stars with a cold one in your free hand, then saddle up to the bar at Barefoot BBQ in Walton, Florida, which is known for their "Airstream Row." Combo platters, picnic packages, and sides galore are all a given here — as is the hospitality and nostalgia. (Photo via Barefoot BBQ)

What’s your favorite food truck or Airstream? Tweet us @BritandCo!

Kelli Acciardo
Kelli Acciardo is a travel, fashion, and beauty writer who spends most of her time in NYC, when she's not traveling around the world. Obsessions include: viral dog videos, spicy margaritas, the perfect metallic bronze eye shadow, and a great bathrobe. Her work has been published in Brit + Co, Bustle, Marie Claire, Refinery29, xoJane, InStyle, Seventeen, POPSUGAR, Women's Health, Teen Vogue, Martha Stewart, and Redbook.
Travel
More From Travel