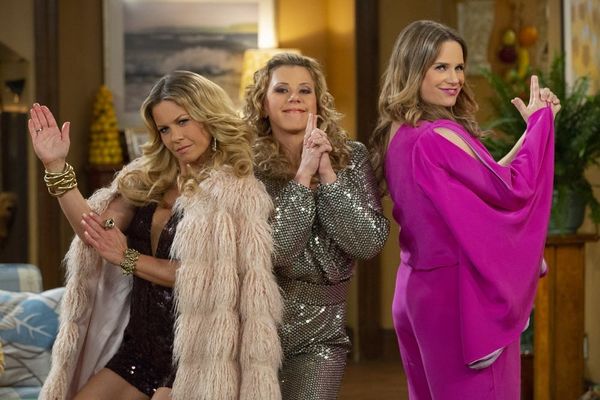 It’s an exciting day for Fuller House fans. Hot on the heels of Bob Saget’s marriage announcement, Netflix has just shared a premiere date for season 4 of the popular show, as well as four photos from the upcoming episodes, which will hit the streaming service on December 14.

The pics make it clear that the family is ready for some holiday fun. But beware: A few of the images present a possible spoiler for anyone who’s not caught up on Kimmy’s particular situation.

The pics also tease guest appearances from Saget’s character, Danny Tanner, John Stamos’ Uncle Jesse, and Lori Loughlin’s Aunt Becky. As for other possible guests, one of the show’s leading ladies, Candace Cameron Bure, spoke with Entertainment Tonight back in September about who she’d like to see on set.

“I think my dream guest star right now is Shawn Mendes,” she said at the time. “I don’t mean to be mom crushing on him, but you know, we have young kids on the show, and I just can’t stop listening to his album on repeat, and I just think he would be perfect.”

We don’t know if Mendes will be stopping by the Fuller House set anytime soon, but one person who did pop up for a visit was Stamos’ baby boy Billy. While the proud dad introduced Saget and Loughlin to his son back in May, the rest of his Fuller House costars met the little one during a set visit in August.

“Everybody was here… He’s old enough to bring around,” the new father told ET at the time. “I was sort of nervous about it because it was a big moment. [Caitlin’s] like, ‘It doesn’t matter.’ I go, ‘It does matter. This is an important moment. I’ve known these people for 30 years. I’ve talked about having kids and now I brought mine on.'”

The actor, who watched the younger actresses on the show grow up into women who are now mothers themselves, said the moment was special for another reason, too. “I got a little emotional because — Bob [Saget] has come over and Dave [Coulier] and Lori [Loughlin] — all of a sudden you see it, like, ‘Oh my god. There’s Candace and Jodie [Sweetin], and, you know, Stephanie and DJ and Kimmy Gibbler holding my little baby.’ It got to me.”

Will you be watching season 4 of Fuller House? Tweet us your thoughts @BritandCo!