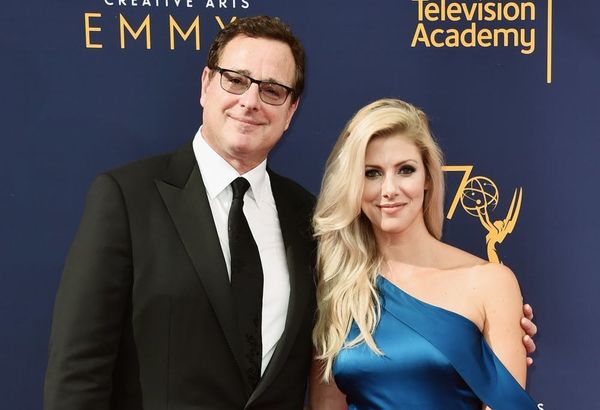 Bob Saget is a married man! The actor and his fiancée, Kelly Rizzo, tied the knot over the weekend in a ceremony set against a beautiful beach backdrop.

“Okay, so we went and did it,” Saget captioned a stunning photo of the couple on their wedding day. “And damn are we happy.” The Fuller House star wore a classic black suit-and-tie, while Rizzo wore an elegant lace gown designed by Pronovias.

Rizzo, a travel vlogger, also celebrated the nuptials on Instagram, posting a similar photo of herself and Saget that showed more of the luscious white floral decor and coastal scenery at Shutters on the Beach in Santa Monica, California. “@bobsaget and I dressed up as a bride and groom for Halloween,” she captioned her pic. “Seriously though, best day of my life.”

The couple got engaged in November 2017 after dating for two years. They were initially introduced by a mutual friend and hit it off quickly, with Rizzo even being welcomed into Saget’s extended TV family — the pair often share snippets of their time spent with Saget’s longtime costar John Stamos and his wife, Caitlin McHugh, on Instagram.

Another celebrity friend of the newlyweds, John Mayer, was also in attendance at the nuptials. The singer had to push back an Instagram live broadcast in order to make it. “Like I said, I had a thing last night,” he wrote on Instagram, reposting Saget’s photo. “And what a beautiful thing it was. Congratulations Kelly and Bob!”