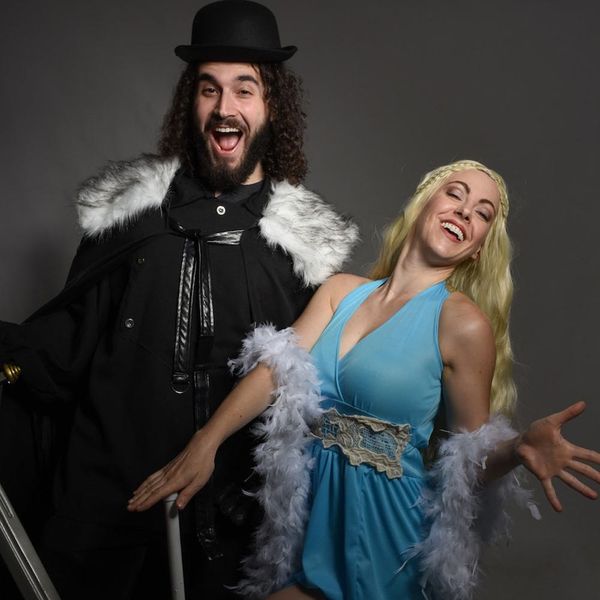 As great as the most recent finale of Game of Thrones was, the rolling of those final credits was met with a tinge of pain. No Westeros for a YEAR?! It’s a hard reality to swallow. If you’re looking for a way to get your GOT fix and you’ve already watched all the episodes 10 times over, we come bearing great news: a Game of Thrones musical parody exists — and it’s actually a hoot.

1. Everyone HATES the one dude who won’t stop talking about how he read all the books. We all have that one friend who thinks he’s better than everyone else for reading the books, so this is obviously VERY relatable. There’s no major villain in the musical, but if I had to pick one, it’d be this guy.

2. The red wedding has been turned into a rap number. The song is called “Stabbings” and it’s probably the happiest you’ll ever be when thinking about the infamous scene.

3. Jon Snow and Ygritte have a romantic ballad. Well, it’s kind of romantic, if Jon singing about all the “stuff he knows” is the epitome of romance to you — which, hey, it could very well be.

4. Donald Trump makes surprise pop-up appearances throughout the show. During a number that takes place at The Wall, Donald starts chatting about how he’s going to “make the Wildlings pay for the wall,” and (spoiler alert!) during Ygritte and Jon’s number, he stabs her because: “No immigrants.” #makewesterosgreatagain

5. There’s a musical number dedicated to all your fan fiction endings. In it Jon Snow and Khaleesi obviously end up together and Harry Potter joins in on the battle against the White Walkers.

6. Hodor has a very dramatic solo. It’s a capella and yes, the lyrics consist of more than the word “Hodor.”

There are literally thousands of shows happening at the Fringe Festival, so what you see is always a bit of a gamble. I wasn’t totally sure what to expect from this production, but, TBH, I laughed the whole time, as did the rest of the audience. The show is produced by Baby Wants Candy, an improv troupe based out of Chicago (worth noting that this particular show is scripted). This is the second year Thrones! has been on the Fringe program.

While last year’s run and this year’s run are similar, the 2016 version has been updated with nods to season six (like the Hodor number). If you can’t make it to Edinburgh within the next few weeks (I mean, it’s kind of far… I get it), the show is also currently playing stateside in Chicago at the Apollo Theatre. Additionally, one of the show’s producers, Albert Samuels, told us there is also talk of a US and international tour happening for the parody play. You can bet we’ll be keeping our fingers crossed for that.

Would you snatch up tickets to see a Game of Thrones musical? Share your thoughts with us on Twitter @BritandCo.

Cortney Clift
Cortney is the senior writer and special projects editor at Brit + Co. She typically covers topics related to women's issues, politics, and lifestyle. When she's not buried behind her computer you'll find her exploring New York City or planning her next big adventure.
Game of Thrones
TV
Game of Thrones
More From TV