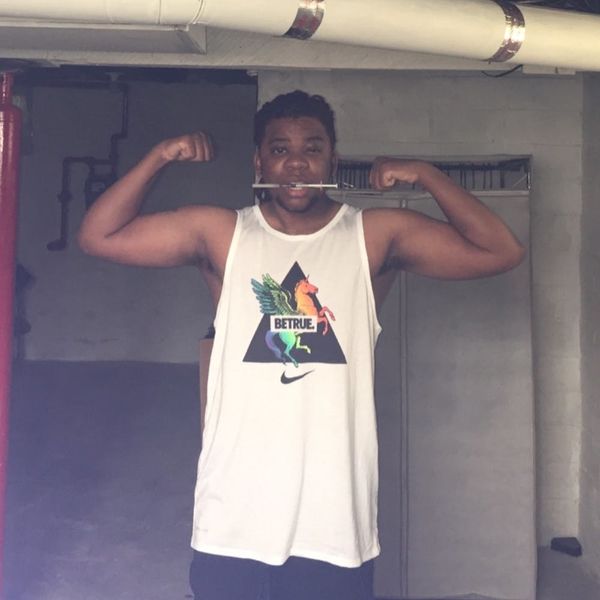 Giovonni Santiago, the 32-year-old activist based out of Akron, Ohio, has always been fighting. It has been a part of his DNA since spending time in the Air Force from 2006 to 2010. When Santiago was not fighting for his country, he was fighting for his own rights.

Until 2011, “Don’t ask, don’t tell” (DADT) was the official United States policy on LGBTQ+ identities within the military. While Santiago was not officially out as a transman while he served, he began his transition process while still in the Force.

What followed next were feelings of being bypassed by commanding officers and segregation from the rest of his unit. As a trans, Black individual, Santiago realized that something had to change; if his own experience wasn’t ideal, he could only imagine how it was for other transgender individuals in the military.

When a back injury forced him out of duty, Santiago found himself at a place where he could finally take action and speak out for those without a voice. He candidly shares that it was in early 2015 when he logged onto Facebook and read the news of a transgender teen who had committed suicide after being bullied. Though Santiago was well aware of the grim suicide rates among transgender people, at that moment he was so tired of seeing the same tragic narrative take place over and over that he thought to himself, “I have to do something about this.”

At the META Center, Santiago and his team mentor trans and gender-variant youth while offering families support and information as needed. The center, which works with up to 25 transgender youth in Akron, holds everything from social gatherings to support groups to give youth a chance to “fully connect” with other young people like themselves. He also hopes to be a grounding presence in their lives.

Beyond helping transgender youth, Santiago has not forgotten about his veterans. After undergoing a gender transition aided by VA medical support, he discovered that he was his doctor’s first transgender patient. At the beginning of 2014, that doctor asked him if he would feel comfortable speaking to a panel of doctors about transitioning and how to better serve trans veterans in general. After a year or so, a team approached Santiago and his doctor, Dr. Megan McNamara, about developing a program that would offer transgender support services to those in the military.

In November 2015, the G.I.V.E. Clinic opened its doors in Cleveland, Ohio and became the first transgender-specific Veterans Affairs clinic in the United States. The clinic provides treatments like hormone therapy and counseling to those who need it in a safe and secure environment. While Santiago is not there daily, he assisted with the launch and is proud that the clinic now sees 70 patients annually, even with President Trump having proposed a US military ban on the service of transgender men and women. (That ban, for now, has been blocked by federal judges.)


As transgender issues increasingly come to the forefront, Santiago says there’s still a lot of ground left to cover. For one, he would like to see more coverage and dialogue on trans people of color in the media. “You always see when they talk about trans people that they’re always white, mostly attractive, heteronormative trans people,” he observes. “That’s almost always the narrative, and I think that that is what the media still gets wrong in the local and national level. That’s the problem we have to fix.”

For now, he will continue to do his part in making considerable groundwork for transgender rights in America.

(Image one by Ryan Deloney and Image two by Shane Wynn)

Amanda Scriver
Amanda Scriver is a passionate storyteller and body image advocate based out of Toronto, Canada. When she isn't writing for various publications, she finds time to Keep Up With The Kardashians while partaking in life's greatest pleasure: the chip buffet. Don't ask her what her favorite restaurant is, it's complicated
Every Body
Gender Issues
Every Body LGBTQ Transgender