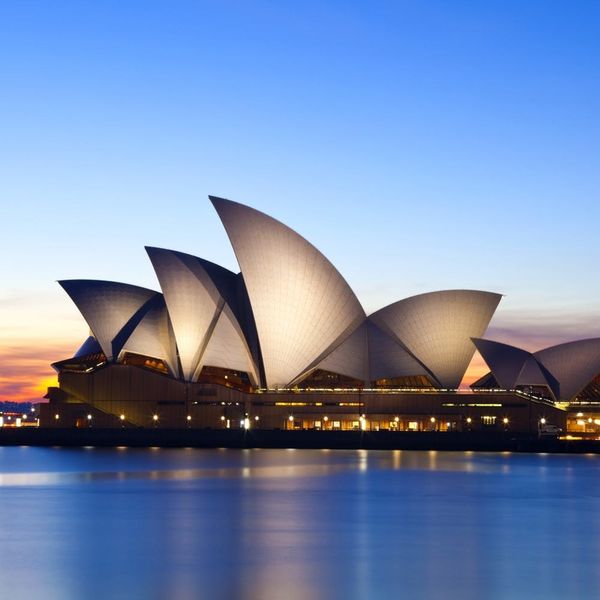 If you’re a travel blog regular, you probably have a few too many places on your must-visit list already. Well #sorrynotsorry music aficionados, we’re about to make your list way longer. Whether you’re hitting up a free summer concert, a country act in Nashville or something more formal like a philharmonic or ballet performance, we have a dream venue for you. Regardless of your taste in music, these 10 stunning spaces belong on your travel bucket list.

1. Sydney Opera House, Sydney, Australia: Even if you’re not a major music fan, it’s likely that you’ll recognize this building’s iconic architecture. The Sydney Opera House boasts several different performance spaces under one insanely pretty (and sparkly) roof. Performances run the gamut of genres from symphony orchestras to cabaret and circus acts. Of course, as the name implies, you can hear some opera here too.

2. Großer Musikvereinssaal, Vienna, Austria: This gilded hall is one of Vienna’s many musical spaces. But this one really takes the cake because of its outstanding acoustics and sheer opulence. The venue was designed to be incredibly inclusive, so concert-goers can get a great view of the performance no matter where they sit or stand. Yay!

3. National Centre for the Performing Arts, Beijing, China: Also known as “The Giant Egg,” Beijing’s performing arts center is truly a work of art, complete with its own man-made lake. Architect Paul Andreu went all out on this thing. Inside there are three crazy-gorgeous concert halls where you can catch plays, operas and ballets.

4. Konzerthaus Berlin, Berlin, Germany: The building that housed this beautiful concert hall was badly damaged in World War II but it has been painstakingly restored to its former glory. The dazzling white, gold and red color scheme sets the stage for all kinds of enchanting classical music.

5. Carnegie Hall, New York, NY: The well-known interior of the main concert space at Carnegie Hall is ingrained in most music lovers’ memories, but the Joan and Sanford I. Weill Recital Hall is a little-known hidden gem. Used for smaller concerts and recitals, this intimate room allows attendees to get a close-up view of each performance. And just look at those chandeliers! Major #decorgoals.

7. Red Rocks Amphitheater, Morrison, CO: A favorite stage of EDM performers and music festival-goers, Red Rocks is a place where cotton-candy-hued sunsets are a regular occurrence. The space is also sometimes used for non-musical events like yoga festivals. The view of the surrounding landscape isn’t too bad either.

8. Royal Opera House, Muscat, Oman: One of the newest venues on this list, Oman’s national opera house opened in 2011. Housing everything from multiple performance spaces to restaurants and landscaped gardens, this amazing work of architecture is a must-see in the Middle East. Performances include opera, ballet, jazz and philharmonic orchestras.

9. Royal Albert Hall, London, England: London’s premier music venue is known for holding The Proms series each summer. It’s not a series of high school dances, but rather a collection of “promenade concerts,” which are less expensive than usual performances and are mostly standing room. The Hall also hosts free musical events on Fridays in the summer, which are perfect for travelers on a budget.

10. Harpa Concert Hall, Reykjavik, Iceland: If you’re headed to Iceland for some much-needed rest and relaxation (they’ve got some of the best health spas in the world!), this glittering structure is not to be missed. Especially gorgeous at night, the venue can be lit up in different colors thanks to of the glass panels that cover its exterior.

Have you visited any of these amazing musical spaces? Tell us about it @BritandCo!

Julia Malacoff
Julia is a writer, editor and proud life-long vegetarian based in Brooklyn, NY. An avid traveler, meditation enthusiast and exercise junkie, she stays active in every new locale she visits.
Music
Travel
Music