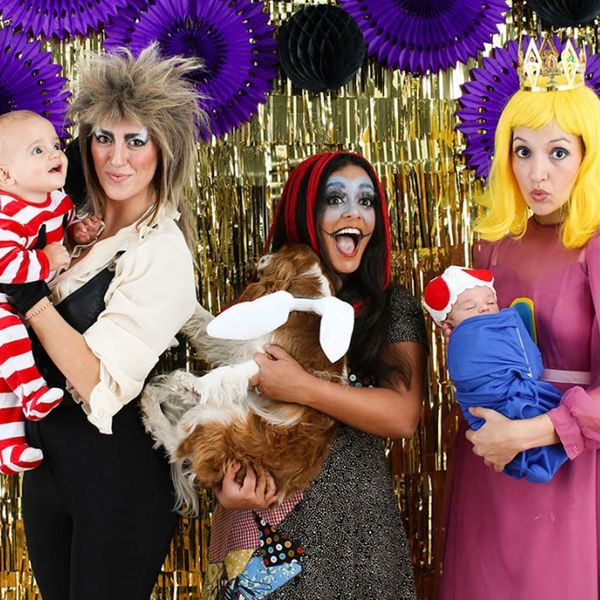 When you’re looking for group Halloween costume ideas, we’ve got you covered, with 100 winning group costume ideas that you can buy or DIY — from Disney princesses to Minions to the cast of Orange Is the New Black. But if you are short on inspiration for group Halloween costumes, look no further than your nearest streaming service, with superheroes, Tim Burton films and FX’s American Horror Story topping the list.

You’ll notice superheroes always travel in groups at Halloween. But beyond the conventional Batman, Superman and Wonder Woman, consider some of the lesser knowns. Harley Quinn from Suicide Squad was spotted all over the New York City Halloween parade last year and topped Google search hits in October. We predict she’ll be spotted even more often this year, with the movie releasing in August.

Inspiration can be found in past films, as well. Characters from Tim Burton films such as Beetlejuice (1988), Edward Scissorhands (1990), A Nightmare Before Christmas (1993) and The Corpse Bride (2005) are always a good bet. The director is a renown master of the ghoulish.

Among favorite cable series, FX’s American Horror Story can be counted on each year to introduce a new frightening cast of characters. From the ghosts of season one’s Murder House to the nazis and nuns of season two’s Asylum to the witches of season three’s Coven to the circus characters of season four’s Freak Show — with the truly frightening Twisty the Clown — to last season’s Hotel. Consider that Asylum totally topped that list for group costumes, as nun costumes and nazi costumes can be found in any party store and dressed up accordingly. The Sister Jude character, made famous by Jessica Lange, requires only a nun costume — or some lingerie, depending on which episode you are aiming at. There’s no word yet on this season’s theme, though co-creator Ryan Murphy has hinted at a dual timeline with echoes of the past.

Political costumes are always popular. This year we can count on finding inspiration from the upcoming 2016 presidential election. Try applying a zombie theme to the political landscape. A surprise hit of last year’s New York City Halloween parade were zombie suffragettes, seen carrying posters demanding dead women’s right to vote. And if there will be little ones in your group, remember that vampires, zombies and really any undead costumes are particularly creepy when applied to children. Almost anyone can be turned into a zombie. Some assembly required; blood sold separately.

Sally Jones
Sally Jones is a writer and editor living in New York City. She has worked at many websites including iVillage, Ladies Home Journal, More, Parenting, Cosmopolitan, The Knot and YourTango, in jobs ranging from editor to COO. Renovation and interior design are her unhealthy obsessions hobbies. She has renovated every home she's lived in, including the rentals, and like... whoa, who does that? You can catch her at her blog Renov8or.
Halloween
Home News
Halloween
More From Home News