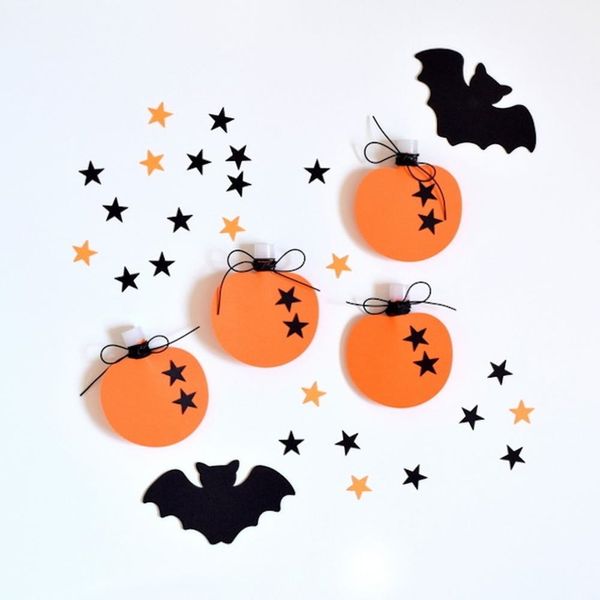 Now, don’t roll your eyes. We know candy is the best part of Halloween, BUT there are some alternatives out there that actually don’t suck. If you’re trying to cut back on the sugar overload this year, think about handing out healthy snacks or things like toys, temporary tattoos or other non-edible treats. Plus, the kids will be getting plenty of candy the entire month so why not step outside the the box and be a little different? Most of these alternatives will last well beyond the candy binge on Halloween night and will make your house a popular stop next year. Happy trick-or-treating!

1. Origami Paper Monsters: If you have a lot of kids coming around, this might be too much work. But if you live in a quieter neighborhood, these little monsters would definitely be a hit. (via Hello, Wonderful)

2. 3D Halloween Balloons: All the kids will want one of these awesome Halloween balloons. Make them extra fun by throwing a couple glow sticks inside to make the faces light up. (via Small Fry)

3. Temporary Tattoos ($15): Hipsters aren’t the only ones who love the temporary tattoos. Stick with a Halloween theme and hand out zombie bite tattoos or go with classic bugs and nature themes.

4. Mummy Juice Box: Everyone gets thirsty after a long night of getting treats. Be the cool person handing out healthy, squeezable fruits or juice boxes, all wrapped up in paper and googly eyes. (via The Nerd’s Wife)

5. Jewelry: DIY some easy beaded bracelets to hand out to every little prince and princess that come by the house. They may not be impressed at first, but when the holiday has passed and they’re still wearing your bracelet, you’ll have the last laugh. (via Brit + Co)

6. Bubbles: Kids of all ages will love chasing each other around with bubbles, especially if you make them glow-in-the-dark for that late night of candy hunting. (via Tatertots and Jello)

7. Glow Stick Pumpkins: Let’s face it — crafts take time and it’s way easier to just open a bag of candy, but these cute glow stick pumpkins can be done the day before Halloween and are super cheap to make. (via Northstory)

8. DIY Surprise Balls: Now that you’ve got a few goodies together, DIY some adorable little mummies and black cats to hand out to all the goblins that stop by. (via CraftWhack)

9. Fruit Leather: Infinitely cooler than raisins, fruit leather runs the fine line of still being a treat without being considered candy. So you might not get *too* many dirty looks. (via Oh So Delicioso)

10. Spooky School Accessories ($7): Even though school is already in session, kids are always burning through pens and pencils. They’ll love showing off these brand new Halloween-themed tools.

11. Cups of Slime: Pick up some little tubs of Playdoh or DIY your own glow-in-the-dark slime to hand out the smaller trick or treaters. Add creepy surprises like spiders or plastic eyeballs to make it extra scary. (via The 36th Avenue)

12. Glow Sticks: Grab a few packs of glow sticks at the dollar store to hand out this season. Not only are glow sticks super fun (especially when they’re dressed up as mini witch brooms), but they’ll also help keep the kids safe when they’re running around at night. (via Northstory)

13. LEGO Pumpkin Treat Bags: Instead of passing out cheap toys that they’ll never really use after the night, give them something that encourages creativity, like LEGOs. (via Repeat Crafter Me)

14. Homemade Crayons: Crayons in a box are boring, but homemade crayons made in fun shapes are totally cool. Find a unique mold or make letter crayons and let every little trick or treater find their own initials. (via Minted)

What’s your favorite non-candy Halloween favor? Tell us how you avoid the sugar rush in the comments below!

Kate Thorn
Kate Thorn is an illustrator, foodie, photographer, and blogger at Create & Kate. She loves creating art, traveling, and all things chocolate. A native to the Great Northwest, she is currently living in London and pretending to be a mature grad student.
Halloween
Current Events
Halloween
More From Current Events