Have a Fiesta with This Cinco de Mayo Jello Shots Recipe 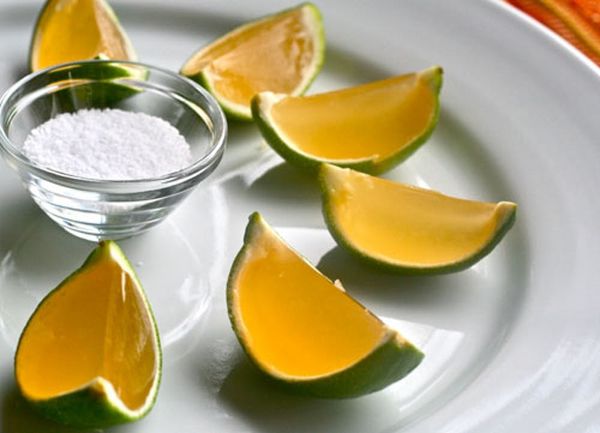 Arriba! It’s time to start planning for your Cinco de Mayo celebrations this weekend. We’ve shown you a dozen Margarita-inspired recipes from fellow foodies in the blogosphere, but party time at Brit HQ is just getting started.

To help get the fiesta going, we enlisted the help of Brit food contributor extraordinaire, Jaymee Sire. Jaymee is the one responsible for putting drunken gummies INSIDE of Star Studded Jello Shots for the Oscars. But her favorite party trick is gelling popular cocktails in citrus peels. Sure, it would be easy to just combine lime jello and tequila, but what’s the fun in that? Make good use out of those delicious fresh limes and whip up a more authentic jello shot!

This will make approximately 24 lime “wedge” jello shots…feel free to double the recipe. ;)

The hardest part is actually hollowing out the lime peels. Trust me, it’s a lot harder than it looks, and if you have a paper cut, I would not recommend this task. I’ve found the easiest way is to cut a small slit at the top of the halved lime.

Gently juice the lime (collecting into a measuring cup).

Then peel the pulp away from the peel. You can use a paring knife or grapefruit knife, but I’ve actually found that using my finger nails works best.

Repeat until you have 12 lime halves and enough lime juice to equal 3 ounces. (You only need 6 limes for the shots, but you might need extra for more juice and/or in case you tear a few).

To keep limes secure, place them in a mini muffin pan. Combine lime juice, an ounce of water and sugar to small saucepan. Sprinkle with gelatin and allow it to soak in a minute or two. Warm over medium heat, stirring until sugar and gelatin dissolve. Stir in tequila and Grand Marnier and pour into lime halves. (I recommend using something with a spout like a measuring cup).

Allow to refrigerate at least 4 hours, or preferably overnight. Once jello has set up, cut into wedges.

Serve with a small bowl of sea salt or large crystal sugar for dipping. (Or a combination of the two!) I found the salt to be a little too intense with the jello, but try both out and see which one suits you best. Cheers!

Jaymee Sire is an Emmy-award winning sports reporter and anchor at Comcast SportsNet Bay Area in San Francisco. During baseball season, she covers the San Francisco Giants for CSN, and often anchors the network’s flagship show, SportsNet Central in the offseason. When she isn’t covering a sporting event, her true passion is food…whether it’s eating out or cooking at home. She writes a blog called E is for Eat, posting alphabet-themed recipes and restaurant reviews several times per week. She also contributes a weekly tailgate blog on csnbayarea.com called Authentic Eats. Be sure to follow Jaymee on Twitter and E is for Eat on Facebook.

Jaymee Sire
Jaymee Sire is an Emmy-award winning television reporter for ESPN. When she isn’t covering a sporting event, her true passion is food. Check out Jaymee’s alphabet-themed food blog, E is for Eat, and be sure to follow her on Twitter & Facebook.
Spike Your Sweets
DIY Recipes
Spike Your Sweets Sweets
The Conversation
More From DIY Recipes