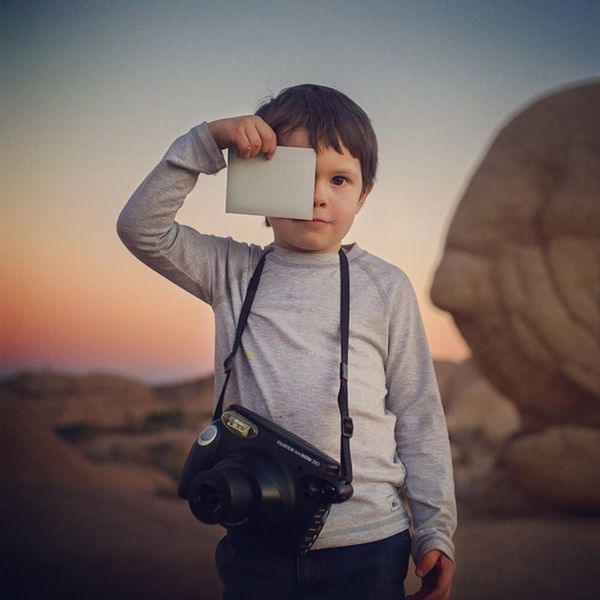 While most of the four-year-olds we know love art, few are racking up bylines in Vogue or National Geographic. Enter Hawkeye Huey, who became National Geographic Creative’s youngest photographer ever when he was just four years old. Now five years old, Hawkeye probably has more Instagram followers than you. He was even included on Rolling Stone’s Top 100 Instagram List.

His dad, Aaron Huey, is a photographer for National Geographic. While traveling in the desert with Hawkeye last year, Aaron gave his son his first instant camera to help document the 18-month trip. He soon realized that his son’s photos were pretty darn good — even better than his own. Now father and son are colleagues photographing for the same magazine.

In late September, Aaron and Hawkeye launched a Kickstarter campaign to fund Hawkeye’s first book of photography. Through this project, many parents have reached out to Aaron and asked him how they can build powerful connections to art with their own children.

As of October 22, Aaron and Hawkeye reached their fundraising goal, which means you’ll be able to purchase Cowboys Indians Hobos Gamblers Patriots Tourists & Sunsets next spring. You can even preorder your copy for just $55. Snag it if you want a gorgeous coffee table book that you and your tiny tot can appreciate.

What hobbies would you like to introduce your kids to? Let us know in the comments below![/request-comments

Diana Le
Diana enjoys living in her spinster girl apartment with her cat Slugbug. She loves singing third wave emo songs at karaoke, going out to brunch, hazelnut soy lattes, and the color orange. She likes wearing backpacks because it makes her feel like Mac from "Foster's Home for Imaginary Friends."
Books
Moms
Books Photography