Here’s How You Can Support Charlottesville Right Now 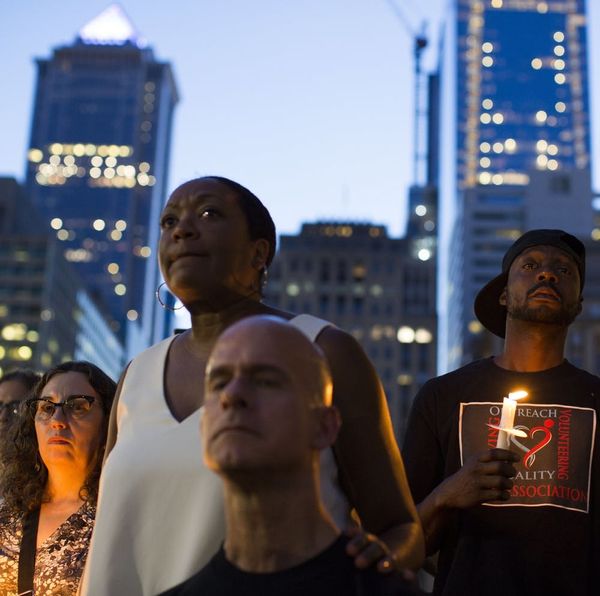 This weekend in Charlottesville, Virginia, the world watched in horror as several hundred white supremacists gathered for an event they dubbed “Unite the Right.”

On Friday, news sites and social media began circulating images of torch-bearing white people, some wearing Nazi insignias and performing Nazi salutes, as they marched to the University of Virginia’s campus to protest the removal of a statue of Robert E. Lee. Some yelled “Heil Trump,” while others carried Confederate flags. The supremacists were met with opposition from students and other counter-protesters, who gathered around the statue and were then surrounded. The next afternoon, white supremacists gathered again, this time in the city’s small downtown. Again, they were met with counter-protesters.

On Saturday afternoon, a “Unite the Right” demonstrator was captured on film apparently running his car into a group of protesters. Heather Heyer, a 32-year-old paralegal and activist, was killed in the collision, which injured 19 others. There have been reports of several other attacks on counter-demonstrators as well, some of whom were badly injured.

Many Americans — and people around the world — are outraged at this display of white supremacy and wondering how they can help. It’s especially important for people who are white (and therefore not the targets of racist hatred like what’s happening in Charlottesville) to take a stand against what Attorney General Jeff Sessions has called an act of domestic terrorism. Here are some practical ways you can help those who were injured or killed resisting the white supremacists.

A GoFundMe page, which is now no longer accepting donations, was created on Sunday by Deandre Harris, a young Black man who was beaten by white supremacists. The beating was caught on video. Graphic photos of Harris’ wounds circulated the internet, and his Go Fund Me raised more than $106,000. Funds totaling $225,010 were also raised for the family of Heather Heyer on GoFundMe.

Plenty of online fundraisers are still active, though, including a Go Fund Me page for 20-year-old Natalie Romero. Romero sustained skull fractures among other injuries while counter-protesting Saturday, according to her fundraiser page, and is not able to pay for treatment.

A YouCaring page has been created for Alexis and Noelle Morris, a mother and daughter who were both injured by the vehicle that killed Heyer. Alexis’s sister created the page, writing, “They will both need physical therapy, Noelle’s phone was destroyed in the attack. The money raised by this campaign will go directly towards their rehab, recovery and medical bills in addition day to day expenses such as food and trauma support.”

Some general funds are also being collected for medical and legal expenses. There is a Go Fund Me page for general medical expenses for injured counter-protesters. A legal fund created by Solidarity C’ville raised nearly $146,000, exceeding the original goal of $50,000. The legal fund’s FUNDLY page directs those who would like to give to check out other ways of financially supporting anti-racist efforts in Charlottesville, some of which are already listed here. For a list of organizations and causes recommended by Solidarity C’ville, check out this link.

HAVE (POSSIBLY UNCOMFORTABLE) CONVERSATIONS WITH FAMILY AND FRIENDS

Some people don’t have the cash to spare for donations right now, and that’s okay. Giving money isn’t enough, anyway. For white people, there’s a real need to have conversations with family and friends when they say or do something racist. Yes, this can be difficult at first, but it’s also totally necessary. In order to make real change happen, those of us who are in the position to do so need to address these issues in our own lives and communities. If you’re not sure how to start these conversations, check out this video from Jay Smooth:

Giving money and speaking frankly about racism and white supremacy are two excellent ways to support the counter-protesters, and generally to work against racism in our society. However, it’s still not enough. White people in a society that is deeply entrenched in a racist past and present must make it a priority in our everyday lives to address and stop racism when and where we see it. Yes, sometimes it will be tough, but people have a way of rising to the occasion. Now is the time, and there’s plenty that can be done to help.

Tell us about when you’ve spoken out against racism on Twitter @BritandCo.