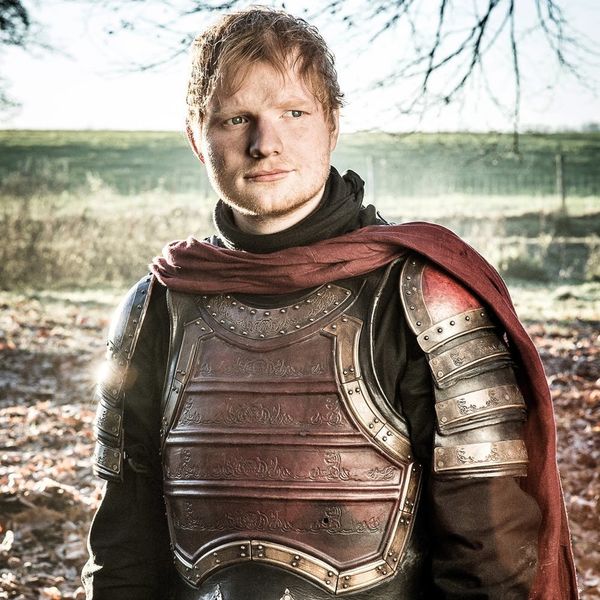 With Game of Thrones done and dusted for another year (or two!), fans are looking back on every single detail from this past season to hold them over. Producers of the hit historical fantasy understand the desire for even more info on their faves, so they’ve released a series of episode-centric behind-the-scenes mini documentaries called The Game Revealed. The first one features a short interview with guest star Ed Sheeran, who revealed the significance of his scene with Arya Stark (Maisie Williams).

In the “Ed Goes Red & Gold” segment, producer David Benioff explains, “Ed Sheeran has got a beautiful voice, and we knew that he was a fan of the show, and we knew that Maisie was obsessed with him. So we always thought it would be fun to try to get him into a Maisie scene at some point.” That scene involved Sheeran as a young Lannister soldier meeting up with Williams’ Arya in the woods.

Sheeran says he assumed they’d “all get killed in the end.” But as Williams explains, it turned out to be “just a nice moment for [Arya] to really enjoy human company without lies and trickery.”

Sheeran’s character didn’t have a name in the script, but the singer nevertheless took time to think about his backstory. “I think that the underlying theme is that, as in any war, the soldiers are just people and we are young boys,” Sheeran says in the doc. “And I think she kind of realizes that she can just kind of chill, let her guard down, have some food, and crack some jokes.”

Did you watch this season of GoT? Tell us @BritandCo!

(Photos via Helen Sloan/courtesy of HBO)