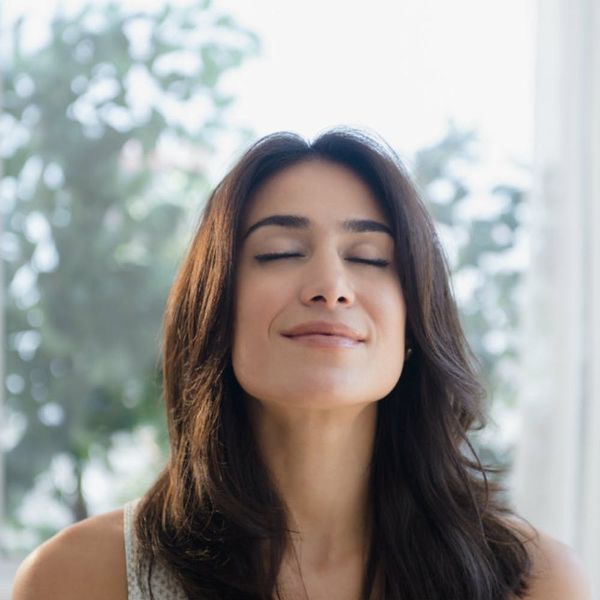 When my friends and family (and celebs like Emma Watson) first started buzzing about the benefits of meditation, it was mostly thanks to the Headspace app. They told me that since they’d started using the app, they were sleeping better, experiencing less pain and generally feeling calmer in the face of stressful situations. Even I could sense a shift in their energy. They were less reactive and there was something about them that just seemed… lighter. Naturally, my reaction was “sign me up.”

I gave Headspace a solid college try. I used the app to meditate daily for a few weeks. While I have absolutely nothing negative to say about the app, it simply didn’t stick. Several more experienced students of mindfulness advised me that meditation requires patience and some serious brain training, and they suggested that I forge ahead with my Headspace routine, even if I was struggling to see results. I did my best to follow their advice, but I became increasingly convinced that meditation wasn’t for me and eventually just started ignoring Headspace’s reminders to fit in my weekly zen sesh.

The positive press around meditation, however, hasn’t gone away in the few years since my first attempt, and I recently began to wonder if the practice was worth another shot. When I heard about a new online video platform for guided meditations, I decided it was the right time to try meditation again. MNDFL started their brick and mortar studio in New York City in 2015 and launched their online content in December 2016. I checked out their website, got a subscription and promised myself that I would commit to a daily meditation practice for one week to see how I felt.

GETTING STARTED ON MNDFL’S PLATFORM

On the first day of my week of meditation, I was excited to see that the MNDFL video library includes videos of mindfulness practices on a range of themes: breath, emotions, heart, energy, sleep and more. It was a good reminder upfront of the many potential benefits of meditation, and I felt even more motivated to get started.

Beyond that, I realized that the site had sorted its 50+ videos into categories based on the length of practice, teacher and style. The whole thing felt really accessible, and the lurking insecurities I was trying to ignore because of my previous “failure” at meditation started to go away. Overall, MNDFL’s video approach felt really fresh, and I was already feeling more confident that my second attempt at getting zen could prove more successful.

MY WEEK OF ONLINE MEDITATION

On day one, I decided to go with one of the “emotions” meditation videos. I watched as the teacher, who was seated cross-legged and posed in front of a tranquil backdrop, welcomed me to the practice, and I did my best to follow her instructions as she began guiding me through a series of breathing exercises. Similar to what I experienced when trying Headspace, I had a hard time focusing all of my attention on my breath, and I was seriously questioning whether or not I was “doing it right.” Still, I noticed right away that having an actual human in front of me was enhancing the experience. I liked the way it felt to attach a personality to the practice, and even though I was still having trouble fully connecting to my breath, seeing a teacher in front of me (instead of just listening to a voice) made me want to get “better” at it.

On the second day, I tried a “heart”-themed video with a different teacher. Although the practice itself was still challenging for me to understand, my ears perked up right away at the teacher’s opening remarks. Her words of wisdom were good food for thought, and I found myself really liking her teaching style. I realized again what a benefit it was to be “face-to-face” with another person when testing out a routine that already felt a little uncomfortable for me. Better yet, there were multiple teachers to choose from, and having the chance to practice with various people to see how each of them could add to my beginner’s knowledge of meditation was a major benefit.

Midway through the week and after testing out a few different teachers and themes of practice, I started to hit my stride. While I was still far from being an expert at meditation, I started to understand what the teachers were prompting me to do. I got better at focusing on my breathing and was able to push away distracting thoughts for a few seconds at a time. Returning to more basic videos with breath as the primary theme made a huge difference. I realized I’d jumped in a bit too fast with the “heart” and “emotions” practices and I was happy I could easily scale back to something simpler.

Trying out meditation at home was still a test of my focus (just as it had been on my first attempt). Working to be fully mindful in the middle of my apartment, with street noise and doorbells and the temptation of my kitchen all so close at hand was difficult, to say the least. Playing the videos from my laptop also meant that I was seeing email notifications and social media updates pinging every few minutes.

Still, I enjoyed having the chance to try out meditation in my own space, but with a visible person guiding me through the process. Even better, for a beginner like me, it was useful to have plenty of options and some control over the type of practice I tried each day. While I’m still far from totally zen, I finished out the week feeling more comfortable with meditation and thinking that it might be possible for me to work it into my routine on a more regular basis.

Would you try online video meditation? Tweet us @BritandCo!

From Your Site Articles
Alli Hoff Kosik
Alli Hoff Kosik is a freelance writer who is passionate about reading, running, rainbow sprinkles, her lipstick collection, watching embarrassing reality TV, and drinking pink wine. She lives in Brooklyn with her husband and (in her dreams, at least) three golden retriever puppies. Listen to her talk books on The SSR Podcast.
Healthy Living
Health
Healthy Living
More From Health