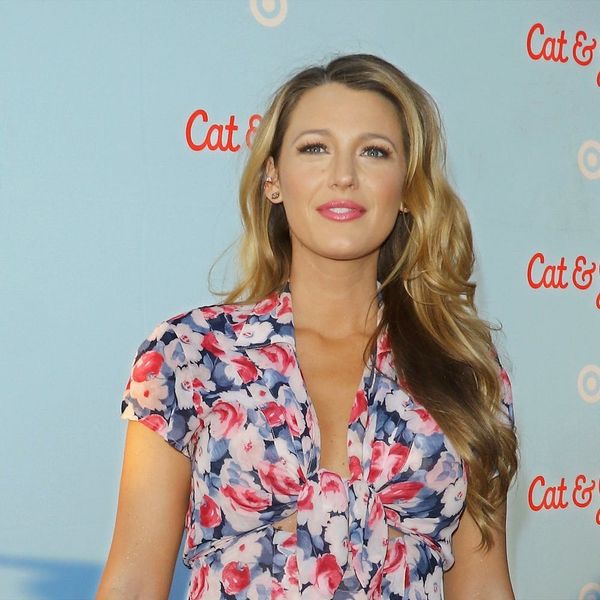 Heading back to the gym after a long hiatus can be seriously scary. Whether it’s because of an injury, illness, pregnancy or a busy few months at work, sometimes the fear of the challenges that come along with getting back on the fitness bandwagon is enough to discourage us from doing it altogether.

Before having her second daughter (whose name is still being kept private by her parents), Blake got in crazy-good shape to film The Shallows, a movie that required her to be extremely active. Because of this, we know she’s no stranger to intense workouts. So if even seasoned gym-goers sometimes get nervous before a big workout or going back to the gym after a break, that means it’s probably pretty normal when it happens to the rest of us, right? To find out, we talked to Dr. Kristen Dieffenbach, who has a PhD in exercise science and specializes in sports psychology. Kristen really knows her stuff and is an executive board member of the Association for Applied Sport Psychology to boot. Here’s what she filled us in on about gym-related anxiety.

1. It’s totally normal. Returning to any activity after some time off can be nerve-wracking, whether it’s fitness-related or not. “Think back to the end of summer and heading back to school,” says Kristen. “That first day was full of anxiety for many people. The combination of anticipation, uncertainty and worry raised butterflies going in all directions.” Yup, we remember that feeling well. According to Kristen, the main reasons people get nervous before going back to the gym are that they’re afraid of not being able to perform the same way they used to, they’re worried about re-injuring themselves (if that’s the reason they stopped working out) or they’re just suffering from the sheer anticipation of what lies ahead. All of these factors may make it harder to actually get back into the gym, she says, which creates a negative cycle of nervousness, delay and more nervousness.

2. You can use it to your advantage. Being nervous doesn’t always have to be a bad thing. In fact, you can use those feelings to motivate yourself and maybe even perform better than you normally would. “Embracing the feelings of nervousness as a positive, a sense of anticipation and excitement rather than a negative or sense of dread can help you use the jitters to your advantage,” Kristen explains. “Adopting and focusing on a ‘this is what it feels like to be ready’ mindset can help channel the surge of adrenaline that often accompanies the jitters.”

In the world of elite athletes, the absence of pre-event jitters is actually a cause for concern, she notes. “In sport psychology, we often talk about the ‘optimal level of arousal’ or ‘optimal up.’ When athletes aren’t ‘up’ for a workout or an event, they talk about being ‘flat’ or under-aroused,” she explains. Being flat can mean that athletes won’t perform at their highest level, so in many cases, the anxiety they get before competing is considered a good thing. Of course, this pendulum can swing too far in the other direction, but if you can embrace your inner athlete and turn your nervousness into a source of energy, getting yourself to the gym might be just a little bit easier!

3. You can combat it. While it’s completely normal to have some jitters, it’s also important to acknowledge that the anxiety you’re feeling is temporary and can be overcome. For those who do make it back to their fitness routine, being nervous can make working out less enjoyable than it was before, which in turn makes it less likely that they’ll continue coming back. Another potential downside to nerves? “They can increase muscle tension, which can increase the risk of injury in the gym,” says Kristen. Yikes.

So how can you conquer this anxiety? It’s all about being prepared and knowing yourself. “Think about how you feel when you are anxious,” Kristen suggests. “Do you get sweaty palms, increased heartbeat, have to use the bathroom more? What are your tells? These physiological signs often seem to occur on their own, but they are a response to something we are thinking or perceiving in our environment.” Understanding what to look for can make these physical responses less scary and less likely to impact your decisions about getting your sweat on. “Catching the signs early will allow you an opportunity to direct them and how you choose to interpret them, rather than get overwhelmed by them,” says Kristen. Think about the things you feel when you get nervous before going to the gym, and the next time you’re feeling that way, remember it’s all in your head! You’re in control of how you feel and the progress you make, so get back at it!

How do you deal with pre-workout anxiety? Share your tips and tricks with us @BritandCo!

Julia Malacoff
Julia is a writer, editor and proud life-long vegetarian based in Brooklyn, NY. An avid traveler, meditation enthusiast and exercise junkie, she stays active in every new locale she visits.
Health
More From Health