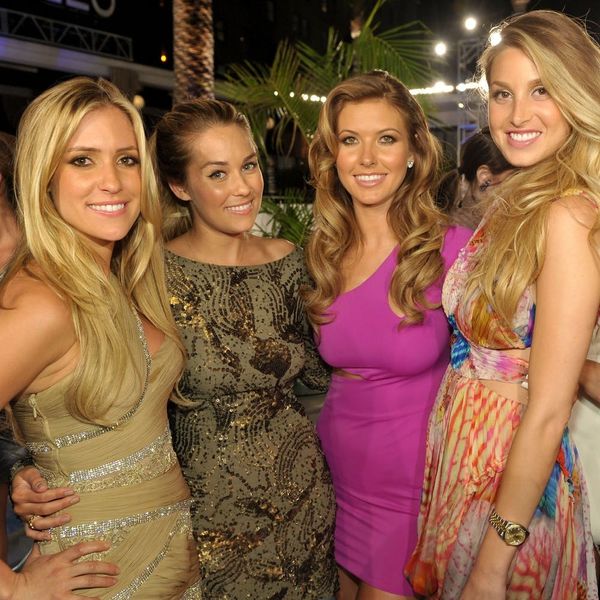 From the moment Kristin Cavallari told Spencer and Heidi Pratt that she’d be down for a Hills reunion, and Whitney Port confirmed that “it’d definitely be something fun,” we’ve been keeping all of our fingers crossed and sending positive vibes out into the reality TV world. And it worked! The cast is reportedly set to reunite at the MTV VMAs this Monday, August 20, to make a major announcement.

It’s been eight years since the show went off the air, and all of its cast members have gone their separate ways, but according to E!, most of the stars, including Kristin Cavallari, Whitney Port, and Heidi and Spencer Pratt, are expected to attend the awards ceremony in New York City to make a big “reunion announcement.”

Whether it will be a full reboot of the series or a standalone special à la Jersey Shore is still unclear, but what we do know so far is that some faves will unfortunately not be taking part.

Lauren Conrad, for one, is simply too busy with her family and new Kohl’s line to participate. And Lo Bosworth famously proclaimed this past February that she doesn’t “want any association with any of those people. The dissociation from all those people is what I’m hungry for.”

Here’s hoping the others, including Audrina Patridge and Brody Jenner, don’t feel the same way!

Are you excited about a possible Hills reunion? Tweet us @BritandCo.

Barbara Pavone
Barbara Pavone is a pop culture-obsessed writer based in beautiful (but ridiculously cold) Montreal, Canada. When she's not working, she's sipping on a Pimm's Cup and daydreaming about her celebrity hero, Saint West.
Nostalgia
Pop Culture
Nostalgia