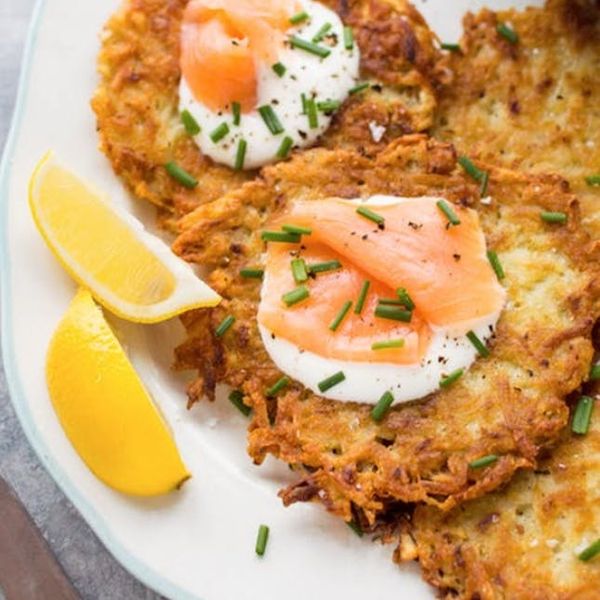 Even if you don't celebrate Hanukkah, you likely love latkes. The golden brown potato pancakes, usually served with applesauce and sour cream, are like mini hash browns, but they have plenty of potential beyond their traditional preparation. Here are 20 updated takes on the potato latke, modernized with everything from healthier vegetables to syrupy sauces.

Waffle-Iron Latkes 5 Ways: Serve miniature latkes with a variety of toppings, such as crème fraîche and apple butter or mozzarella and persimmon. You'll have a great time mixing and matching, and even the pickiest palates will be piqued. (via Brit + Co)
Latkes With Spiced Pear Compote: Tired of applesauce? Use pears, lemon juice, brown sugar, and cinnamon to make a sweetly sophisticated compote. (via Love and Olive Oil)
Crispy Potato Latkes With Smoked Salmon and Sour Cream: Lox is a fixture on many a holiday brunch spread; serve it on latkes with sour cream and chives for a two-in-one dish. (via Domestic Gothess)
Mini Latkes With Apple Crème Fraîche: This cinnamon-filled crème fraîche gives you the best of both worlds: fruity sweetness and tangy creaminess. (via What Should I Make For...)
Sweet Onion Latkes With Chive Sour Cream: Zingy onions and horseradish sour cream lend plain potato latkes much more of a bite. (via The View From Great Island)
Waffled Vegetable Latkes: We're the last ones to hate on latkes, but let's be real: They offer very little nutrition. Remedy that with this veggie-rich variety, made with carrots, zucchini, bell pepper, and onion. (via Skinnytaste)
Butternut Squash Latkes: Bright orange butternut squash gives traditional latkes an Instagrammable makeover. (via Damn Delicious)
Celery Root Latkes: If ever you needed an excuse to experiment with versatile celery root, make these addictively crispy pancakes. (via What Should I Make For...)
Sweet Potato Latkes With Spiked Apple Sauce: Add brandy to everyday applesauce for the ideal complement to these sweet-potato pancakes. (via Conoisseurus Veg)
Chipotle Cheddar Potato Latkes: Flattening these slightly spicy cheddar-potato pancakes extra thinly gives you an interesting fusion between lacy cheese crisps and latkes. (via Half Baked Harvest)
Sweet Potato Latke Cake With Baked Eggs: With protein-rich eggs in the mix, it's more than acceptable to eat potatoes for breakfast. (via The Healthy Maven)
Cheesy White and Sweet Potato Latkes: Two cups of cheddar cheese never hurt anything, especially not these garlicky latkes. (via Hungry Couple)
Zucchini Latkes With Maple Cranberry Sauce: Sweet cranberry sauce balances out the saltiness of this healthified staple. (via The View From Great Island)
Sweet Potato Latkes With Brown Sugar Syrup and Candied Pecans: If you have a sweet tooth, you'll love these crispy, crunchy latkes, which are heated up with a surprising touch of curry powder and cayenne pepper. (via Tori Avey)
Za'atar Spiced Potato and Carrot Latkes: Za'atar and cumin give these multicolored latkes a spicy Middle Eastern flair. (via Foxes Love Lemons)
Potato Latkes With Apple-Date Chutney and Cinnamon Sour Cream: If you love apples — but not the runny texture of applesauce — opt for this toothsome chutney, which pairs wonderfully with maple syrup-sweetened sour cream. (via Leite's Culinaria)
Spiralized Sweet Potato and Parsnip Latkes: There's no reason your spiralizer should collect dust in the colder months. Use it to turn cool veggies into piping-hot pancakes. (via Eating Bird Food)
Potato, Onion, and Cauliflower Latkes: Watching your carb count? Swap out some of the potatoes in latkes for finely chopped cauliflower. (via Hungry Couple)
Curry Vegetable Latkes: There are no potatoes in these pillowy, thickly formed latkes, but with all that curry flavor, you won't miss 'em. (via Tori Avey)
Cilantro Jalapeno Latkes: Go bold or go home with these spicy latkes, topped with chipotle sour cream. (via Leite's Culinaria)

Are you inspired to grab your griddle and get frying? Tell us about your favorite fritters on Twitter!

From Your Site Articles
Heather Sage
Heather Sage is a gluten-free recipe developer and freelance writer living in Orlando by way of the Silicon Valley. When she isn’t playing around with alternative flours in the kitchen, she can be found tackling DIY projects around the house or exploring her neighborhood. Check out her gluten-free recipe blog, A Sage Amalgam.
Appetizer Recipes
Holidays
Appetizer Recipes Hanukkah Holiday Recipes Holidays Recipe Roundup
The Conversation (1)

I love you a-latke hahaha. I've never thought about making them sweet but that sounds amazing!