How to Get a Raise: Start Asking for One 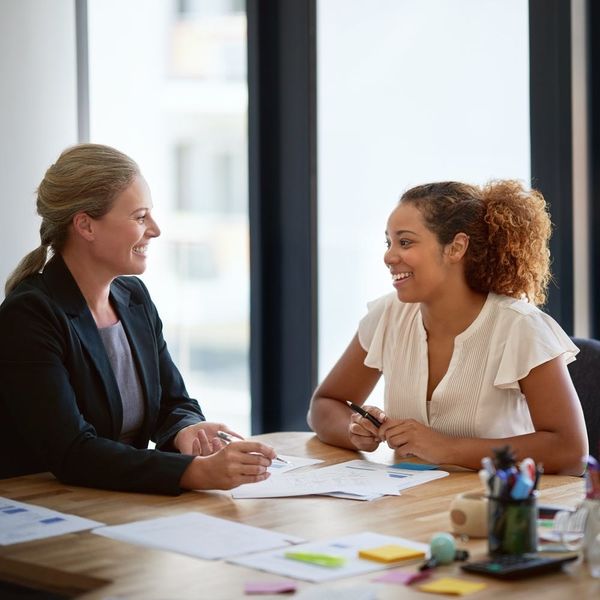 There are a few conversations in any woman’s life that are almost unavoidably uncomfortable: the DTR talk with a person you really like comes to mind, along with the moment you drop the news to your BFF that you’re moving across the country, or the one where you admit to your S.O. that you’ve only been pretending to like the homemade meal they used to win you over on your second date. Another conversation that’s pretty much always a challenge? The one where you approach your boss asking for more money.

Naturally, we want to own those conversations around salary negotiations. Unfortunately, though, it’s hard just to get yourself to initiate that discussion. According to Ellevest founder and CEO and MAKERS Money host Sallie Krawcheck, women who ask for raises do tend to get them… they’re just less likely to ask in the first place. The gender pay gap — in which women make 80 percent of what men make for doing the same jobs, and less than that for minority women — means that women have less power. And we can’t let that stand.

In an effort to give women the tools they need to reverse these tides, in the episode titled Reclaim Your Worth, Krawcheck and her guest, Sally Thornton, founder and CEO of executive recruiting firm Forshay, offer some tips for negotiating and asking for raises. Scroll for all the details, and prepare to increase your earning power.

1. Do your research. Don’t even think about starting a raise-related conversation with your manager before taking the time to really zero in on what you and your work are worth. Krawcheck recommends using tools like Glassdoor, GetRaised, and Comparably to figure out what other people in your industry and geographical region earn for doing a similar job. The more specific you can get, the better.

2. Clearly define what success looks like. You’ve done your research, and now it’s time to sit down face-to-face with your supervisor and ask for what you want. Frame the raise you’re seeking as the natural result of you being successful at your job. Fill in this blank: “If I’m achieving success, this is how much money I should be making: ______________.”

3. Establish a (short) timeline. The fact that you’re approaching your boss about a raise proactively instead of waiting for the next predetermined opportunity to reevaluate your compensation means that you think you deserve that raise sooner — so there’s no point in hiding that. Make it clear that you’re hoping to be considered for a raise immediately. The worse that can happen is that your boss will remind you of an upcoming company-wide pay adjustment period. You have nothing to lose.

4. Prove it’s a win-win. As you demonstrate to your boss what success is going to look like for you (AKA more cash money for a job well done), be sure to communicate how your continued contributions will mean success for them. An increase in the company’s financial commitment to you doesn’t have to be a zero-sum game, especially if you present it as a way to improve business and performance for everyone.

5. Prepare a list of non-monetary asks. Any time you approach a manager or supervisor about a raise, Krawcheck also recommends compiling a list of things to ask for that have nothing to do with your immediate paycheck. Research opportunities for continuing education classes or leadership retreats and find out if the company will pay for you to attend. Don’t walk out of the meeting until you have sign-off on at least one of those asks. That way, even if you don’t get a raise per se, you’ll still have secured support from your boss that will one day translate into dollars and cents.

6. Be confident. Thornton says that a lack of confidence is the number one mistake she sees women making in the workplace. Now is a great time to harness the power we’re seeing in communities of women everywhere and apply it at the office, where a supportive group of female coworkers can be a great reminder that there is room for more than one of us at the proverbial table. Walk into compensation-related conversations with that confidence and see how great of a negotiator you can be.

7. Ask for feedback. If you’ve already watched another colleague (particularly a male one) secure the raise or promotion that you were looking for and were confident you deserved, don’t be afraid to approach your boss and ask for their professional feedback. If they can give you a clear reason for the decision, great! Take that constructive criticism and use it to fuel your work so you’ll be a shoo-in for the next opportunity. If the response is vague and confusing, however — “We just didn’t think you were the right fit” or “It didn’t seem like the right time for you” — you might consider pushing harder, approaching HR, or looking for jobs elsewhere.

RELATED: How to Get Comfortable Talking About Your Salary

Alli Hoff Kosik
Alli Hoff Kosik is a freelance writer who is passionate about reading, running, rainbow sprinkles, her lipstick collection, watching embarrassing reality TV, and drinking pink wine. She lives in Brooklyn with her husband and (in her dreams, at least) three golden retriever puppies. Listen to her talk books on The SSR Podcast.
Career Advice
Work
Career Advice Girlboss Money
More From Work