How to Get Comfortable Talking About Your Salary 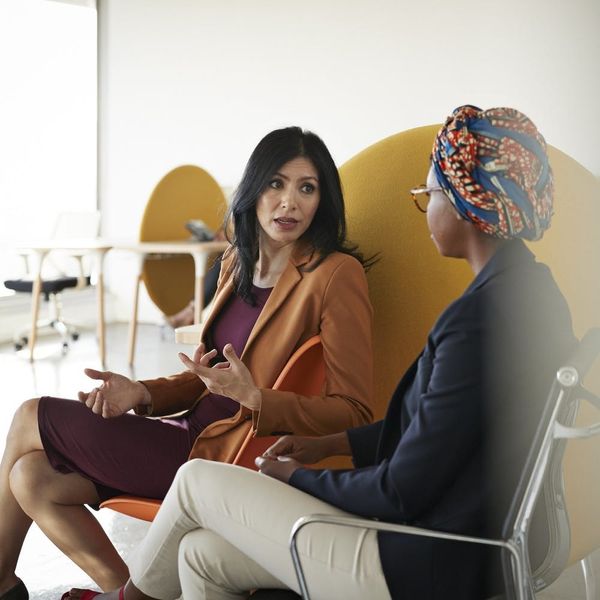 We talk about nearly everything with our friends and coworkers, from our favorite Netflix shows, to work projects, to details about our significant others, but the once the subject of money comes up, the brunch table (or happy hour booth) often goes dead silent. How much do you make? We’ve been socially conditioned to believe that discussing our salaries is taboo, but actually, being more transparent about the amount you’re raking in yearly is one of the factors that can help close the gender wage gap (and the wage gap between white women and many women of color). Resources geared toward women like Career Contessa, the guide to navigating everything from interviews to promotions and the conversations that go along with them, are there to assist you in your journey too. The company recently created The Salary Project, a free tool that offers participants personalized salary reports for their industries, or industries they’re thinking of transitioning to, based on detailed information like age, location, level, and more. We spoke with Career Contessa founder and CEO Lauren McGoodwin about how we can open up the dialogue around salaries in order to make sure they’re on par throughout our careers.

1. Start your career off with informational interviews to advise you on what entry level salary to take. “If I were starting my career and asking about salaries in similar fields, I’d try to have informational interviews with a few people who are one step above the position I’m going for,” McGoodwin says. “People in those positions can be transparent about what starting salary is appropriate, even if they simply offer you a ballpark range (within $5,000) of what they started out making.” This is a great way to begin building a “whisper network” within your industry, too.

2. When applying for mid-level jobs, take your market value into account. Once you’re past entry level, McGoodwin points out, you have concrete achievements that you can bring to the salary negotiation table from your other jobs, like managing teams or advanced degrees. “Now, you also have a network, where you can tell people that you’re quietly job searching, and can say to them, ‘I can’t take less than XYZ,'” McGoodwin adds.

3. At happy hour, casually introduce the topic. To combat awkwardness around financial topics, try bringing them up in a casual, light conversation in a setting outside of work. You may note that someone you know just got a new job, or is looking for a new job, and can introduce it that way, McGoodwin says. It can be uncomfortable to bring up, but people may really appreciate your perspective if they’re feeling stuck at their current salary. Or, flip the convo to living situations, which can be a little bit easier to introduce. “I found when I moved to LA, people were secretive about how much rent they pay. That’s a good place to start, by talking about rent and housing,” McGoodwin says. “If you offer up your information first, that can help move along the conversation.”

4. Always include women of all ethnicities, as well as men in your whisper network. When having these open dialogues about salary, don’t just ask one person or someone whose demographics are exactly like yours. “Be sure to talk to men as well as women of ethnicities other than your own,” says McGoodwin. It’s important to get these other points of view, because on average, men, of course, but also Asian women have less of a wage gap than white women, while the wage gap is larger for African American and Latinx women, according to Career Contessa’s stats. Talking to others about salary takes practice, but is a valuable skill, and may save you from being underpaid from the start. “If you don’t discuss salary and you start your career getting low-balled, you’re going to work your way up to what you could have started from,” McGoodwin says.

5. If you become a parent, lean on those who have done it before. Another major contributor to the gender wage gap is the fact that many women want a longer parental leave than their company allows and may leave the industry and return later on, or they may be required to work part-time due to lack of affordable childcare. Regardless of when you return to work after your child arrives, make sure you do your homework of outlining the value you continue to bring to the company, just as you would if you were asking for a raise or promotion, McGoodwin says. “And go back to your network of women who have successfully navigated this before. You want to still be an asset to your team and your family, so learn from people who have been there,” she adds.

6. When you’re a manager, be a good role model and open to discussion with your employees. “If you’re managing a team, you can lead by example by talking about money and negotiating salary for your market value in front of your employees,” McGoodwin says. It’s important to lend a listening ear, especially if your employees are thinking about asking for raises (even if those numbers are a bit loftier than what you might ask for, she adds). “As a manager, make sure there are opportunities to grow within the company, and make a point to talk about the success stories of others, especially in negotiating salary and raises,” McGoodwin says.

7. If you have your own company, put plenty of thought into employee compensation packages. Employees have the right to full transparency from the company they’re working for, so that they have a grasp of why they make what they make. “Companies should be making sure that employees have a solid understanding of their strategy for putting together those compensation packages,” McGoodwin says. People should be able to double check that they’re earning the same amount as others in a similar role, and any secrecy in that doesn’t help anyone (and certainly doesn’t boost employee satisfaction). In regard to increased salary transparency in the corporate world, “There’s a shift in power,” McGoodwin says. “Employees are saying, ‘why wasn’t I able to ask these questions before?'”

RELATED: This Is How to Be a Great Manager

Mara Santilli
Mara Santilli is a freelance writer based in New England. Her work has appeared in several publications, including Shape and Marie Claire. When she isn't writing, she can be found munching on any piece of dark chocolate she can get her hands on, plunking out her favorite acoustic songs on the guitar, and finding the cheapest Broadway tickets possible. Follow her adventures on Instagram to see where she's headed next.
Career Advice
Work
Career Advice
More From Work