The Art of Writing a Thank You Note After an Interview 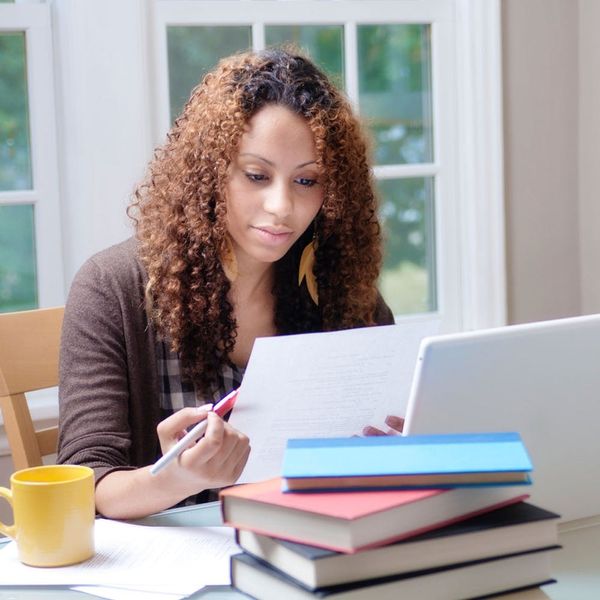 If you were Googling “thank you note after interview” in the hopes that someone on the world wide web would tell you they’re outdated and relieve you of your duty, you’re in the wrong place. Like it or not, thank you notes are a must. Whether it’s an informational interview or traditional job interview, you need to send a thank you note. But is an email enough these days? Does a handwritten note really help your chances? What should you say besides “thanks for your time?” Fear not — we’re breaking it down for you.

Why Thank You Notes Are Important

First and foremost, you should be grateful for this person’s time, and it is common courtesy to tell them so. But if you’re looking for a more selfish reason: Yes, it can actually affect your prospects. “It’s not just good manners,” says Kate White, who has interviewed many an applicant in her former role as the editor-in-chief of Cosmopolitan. “The interviewer is judging your passion for the job based on whether you send a note and what you say in it.”

Some will tell you it doesn’t matter; the hiring decision has been made and a note means nothing. In fact, even White admitted that she got one of her editor-in-chief jobs without having sent a thank you note — she had two little kids at the time. “If you are their perfect candidate, they’re probably going to overlook it,” she says. But most hiring managers I spoke to confirmed that it does reflect poorly on the candidate — one even said a thank you note is “all but required” for a candidate to move on to the next level.

You can’t know whether you’re dealing with someone who puts a major or minor emphasis on the thank you note, so why take the risk?

Is an Email Okay?

Let’s just get this out of the way: A thank you email within 24 hours of the interview is 100 percent necessary. “Not sending an email — whether you are interested in the position or not — is unprofessional,” says Domenick Cilea, president of Springboard Public Relations. You want to contribute to the hiring manager’s impression of you while it’s still fresh in his or her mind. But is that enough? For most, it seems to be. According to that same CareerBuilder survey, 89 percent said it is okay to send a thank you note in the form of an email.

“Up until a few years ago, I was still advising people to cover their bases and send a quick same-day thank you email (but not stalker-like from the elevator!), saying you have also dropped a note in the mail,” White says. “But snail mail can take so long these days, and email thank you notes are so common, you probably don’t have to do both in many situations. Decide based on the age of the interviewer and the vibe of the place.”

One more tip for going the extra mile? Millennial Career Coach Kim Wensel suggests personalized stationery over the standard “thank you” card. “It displays a level of professionalism not often seen among younger candidates,” she says. Hey, it certainly won’t hurt, and best-case scenario, it will re-affirm your thoughtfulness, professionalism and enthusiasm about the position.

For a solution that is both appropriately speedy and shows more effort than a simple email, try sending a Paperless Post. Keep the design simple and reflective of the company and manager to whom you are sending it. (I tend to like this pretty teal card or this sleek white and gold option.) Even my current boss, a self-proclaimed “stationery geek” who loves handwritten notes, appreciated the Paperless Post I sent her after our interview.

What to Write in a Thank You Note

If you plan to do both, and especially if you are only sending an email, make it count. “When it comes to showing gratitude, the message is more important than the medium,” says Shilpa Ahuja, a public relations specialist. All the hiring managers I spoke to agreed that authenticity and personalization is key — address a concern the manager brought up in the interview, or even (depending on the company) make a small joke about something you talked about. If you’re sending notes to multiple people in one company, make sure they do not appear copied and pasted. And, of course, take the opportunity to ask for the business.

“If you do send only an email, don’t just dash it off,” White says. You certainly do need to thank the person for their time, but take it a step further. “Reiterate how much you enjoyed the interview, that you love the sound of the job and why you’ll be a good fit,” she adds. In other words, come out and say that you want the job. Explain why you’re well suited for the position. A slap-dash “thanks for your time!” may not always make an impact, but that certainly will.

And finally, get a damn proofreader. “In hiring, I always factored in whether I’d received a thank you note, but quality was important, not just whether it had been sent,” White says. Typos or grammar mistakes will almost certainly diminish their impression of you rather than improve it. Who wants to hire someone who isn’t conscientious enough to note the difference between “their” and “they’re”?

Here’s a sample thank you note based on many I have sent. This is a very basic template, but the more personalization, the better!

Thank you so much for taking the time to speak with me yesterday. This job honestly feels like a perfect fit — my experience has well prepared me for [the responsibilities of the role], and I have [the skills she is looking for] to [accomplish what she is looking to accomplish]. I know I would be a valuable, creative and enthusiastic member of your team, and I can already tell that we would work well together.

Thanks again for the awesome opportunity. I look forward to hearing from you soon, and hopefully joining your fantastic team. Until then, good luck with that TBR pile!

Do you send a handwritten thank you note or an email? Let us know by tweeting us @BritandCo!

This post was previously published on Levo League by Kelsey Manning.