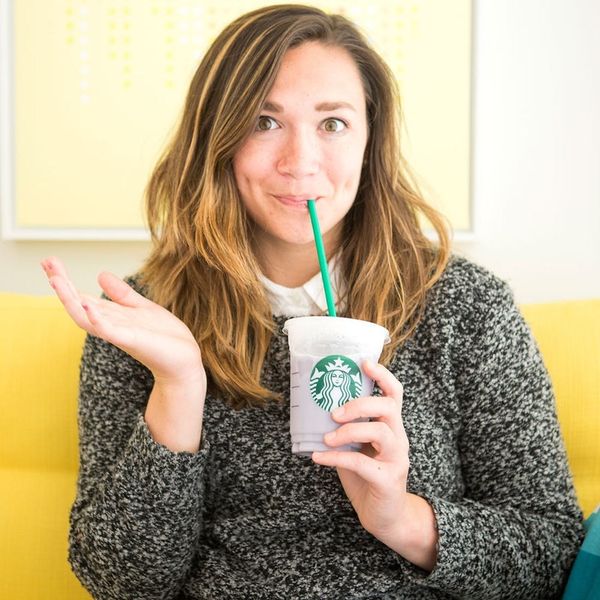 These Starbucks orders are getting out of hand. Long gone are the days of straight black coffees, lattes and espressos. Instead, it’s probably more common for baristas to get orders for Caramel Waffle Cone Frappuccinos or a Vanilla Sweet Cream Cold Brew. And just in case you wanted to make your order a little MORE complicated, there’s also a whole secret menu you might not even know about. A few weeks ago the Internet practically exploded over the mysterious “pink drink,” and now there’s a similar beverage taking social media by storm. Introducing the PURPLE drink.

Considering I’m basically now an official Starbucks taste tester, I decided to give this one a go. You might remember that I also made my way to Starbucks in the midst of the pink drink craziness to attempt to order my own. I succeeded, but wasn’t such a fan of it. Basically, it tasted like an insanely sweet (not to mention expensive) cup of strawberry milk. So when I hit up Starbucks again this afternoon in search of the purple drink, I was sceptical.

For starters, it’s a secret menu item. So you have to know what’s in it. I went up to the barista and asked for a “passion iced tea with soy milk, vanilla syrup and blackberries.” Sadly, they were out of berries at this particular location, but they were good with all the rest. After placing my custom order, the barista mentioned a few people have come in requesting this. He even said, “I’m into it but I like it with coconut milk.” Noted, sir.

The color is definitely alluring. It’s a creamy, pastel sort of purple that’s almost more of a lavender. It also did come as a bit of a surprise, considering when the passion tea is mixed with water it’s much more of a pink hue.

I took my first sip expecting a mouthful of sugar, but to be honest, that wasn’t the case. It was sweet but not overwhelmingly so. It was creamy and fruity and tasted like something familiar I couldn’t quite put my finger on. Then I had a few more sips and realized what it was: a blueberry muffin. The purple drink tastes like a liquid version of a blueberry muffin.

When I tried the pink drink, I had a few sips and was then pretty over it, but with this one — I’m not ashamed to say — I finished the whole thing. And you know what? I might even order it again.

Cortney Clift
Cortney is the senior writer and special projects editor at Brit + Co. She typically covers topics related to women's issues, politics, and lifestyle. When she's not buried behind her computer you'll find her exploring New York City or planning her next big adventure.
Starbucks
Entertainment
Starbucks