This Colorful IKEA Collection Is Inspired By Your DIY Hacks (Yes, You) 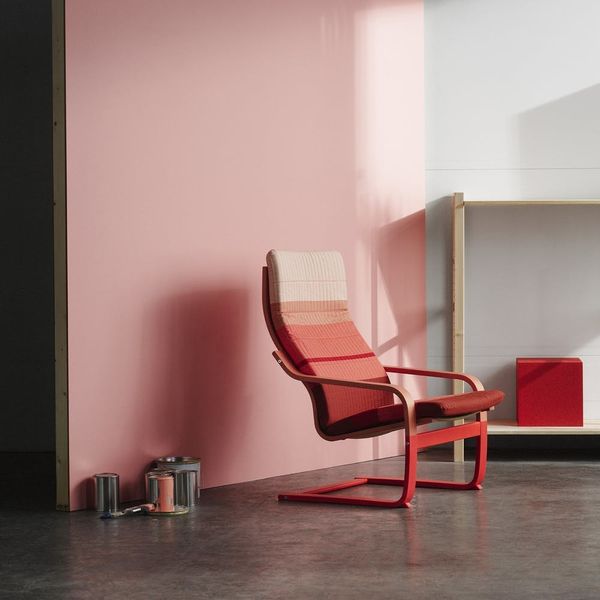 If you’re crafty and budget-conscious, chances are you’ve dipped your toes into the world of IKEA hacking at least once. The community of self-professed hackers sharing tips on how to rework the Swedish retailer’s traditionally minimalist furniture is actually huge: the “#ikeahacks” tag on Instagram alone boasts over 160,000 such projects. And whether you fancy turning some modular storage into your dream bar cart or whipping up an easy 15-minute plant hanger on a weekend, the urge to customize IKEA’s affordable, functional finds is pretty hard to resist. So hard to resist, in fact, that even IKEA is getting in on the game — sort of. The brand’s limited-edition LYSKRAFT collection is the brainchild of Dutch designers Scholten & Baijings and draws inspiration from the hacks of real-life DIYers.

In Amsterdam, Scholten & Baijings are known for their bold use of color and pattern, so it makes perfect sense that they would be tasked with bringing brightness to some of IKEA’s most iconic shapes. “The collection carries our personal signature and is bursting with colors,” Baijings said of the line. The duo’s first project was taking on the KLIPPAN couch, a standby in first apartments everywhere. They crafted two new quilted covers for the $319 couch, imparting subtle pattern into the rounded silhouette in a way that feels soft, cozy, and elevated. (Look closely and you’ll notice bright, high-contrast thread used to stitch the channels.) But the real stroke of genius is the leg options. Available in two brights and two neutrals, the LYSKRAFT legs feature a “dipped” effect — something we’ve seen a lot of in original DIY hacks — that really adds a cool detail to the couch. And at $20 for a set, they’re a steal.

The equally ever-present POÄNG armchair ($70) and cushion ($99) also got an update. Bright swaths of color in the same family of hues turn these workaday chairs into something that could easily be mistaken for a hip Pantone collab. The coordinating cushions are ideal for color-lovers and resemble oversized paint chips come to life. “When IKEA approached us with the idea for the collection, it immediately sparked our curiosity,” said Baijings. “Reimagining classics that are found in so many homes all over the world has been a truly inspiring and challenging process for us.”

Coordinating accessories, like melamine trays ($5-10) and napkins, round out the capsule in a pattern of checks reminiscent of washi tape DIYs. Clear glassware, starting at $1, serves as a neutral counterpart to this color-soaked collection. This limited-edition line might be little in size, but it’s certainly big on impact… not unlike the “small but mighty” DIY attitude of the hackers who inspired it. As IKEA Creative Leader Michael Nikolic put it, “The hackers are an inspiration to us, and with LYSKRAFT we feel it’s our time to show we got inspired by them.”

The limited-edition collection ranges in price from $1 to $319 and will be available in select locations in August.

Which piece is your favorite? Tell us @BritandCo!

Emily Bihl
Emily Bihl is a freelance writer and sometimes-songwriter currently undoing a lifetime of healthy eating in the great city of New Orleans. When she’s not writing, she can be found covered in clay at the ceramics studio or attempting an approximated downward dog. She likes her black labrador Selkie, unexpected anagrams, and cracking the sugar on creme brûlée with the back of a spoon.
Furniture
Home News
Furniture Home Collaboration IKEA IKEA Hacks