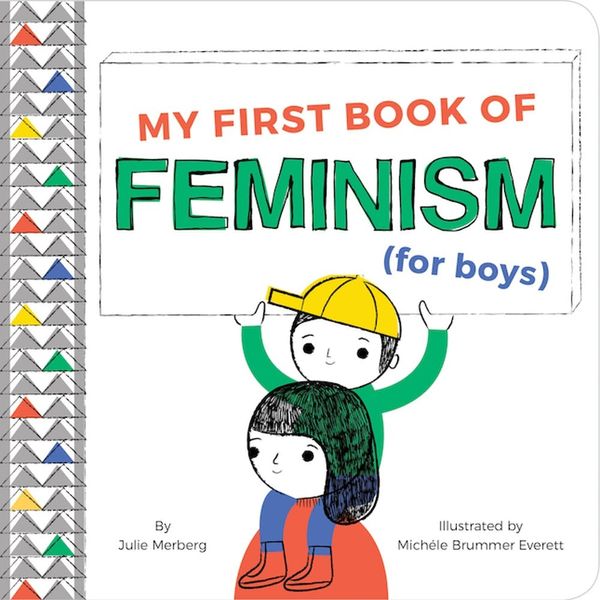 In the wake of the#MeToo movement, more parents are asking themselves what they can do to raise feminist sons who can treat others equally as they grow up. Plus, male celebs are speaking out about being advocates for women and wanting to amplify women’s voices. Children’s literature is breaking down barriers too and introducing the next generation to main characters who are different kinds of fathers, sons, and love interests. Here, we share nine great books that will inspire your young feminist son to stand up for women’s rights.

This board book, geared toward infants to three-year-olds, focuses on women’s rights as a human rights issue. Feminism is broken down into age-appropriate suggestions about how young boys can respect women, and the book shows that chores and jobs aren’t simply limited to gender roles. Illustrator Michéle Brummer Everett uses primary colors and powerful images to keep the message light and simple.

The “She Persisted” part of the title of this children’s book is a nod to Senator Elizabeth Warren, who Republican senators attempted to silence during the 2017 US Attorney General nomination hearings. This collection features prominent women who forged ahead despite adversity and is a wonderful introduction to budding feminists about international women’s history.

Narwhals are horned sea creatures, but Kelp is a bit different than his narwhal family. His tusk is not long. He’s not a great swimmer. But when he meets another creature who looks similar to him, he realizes he might be a unicorn. This sweet story is all about standing out and love, a lesson that encourages empathy for all.

Auggie Pullman pulls heartstrings, guaranteed. The main character of this novel for readers ages 8 to 12 is born with a facial deformity. All Auggie wants is to attend fifth grade at a public school like a normal kid, but Auggie soon discovers that he’s anything but ordinary. It’s a tremendous book to share with boys that delves deep into young boys’ emotions and compassion for each other. Read the book, then watch the movie version (starring Julia Roberts and Owen Wilson) with your kiddo. And keep the tissues handy.

The first book in a fantasy trilogy, Alanna of Trebond lives in a world where girls are forbidden to become warriors. Disguised as a boy and using her twin brother’s identity, Alanna sets off to train as a page on the path to knighthood. Fantasy writer Tamora Pierce was one of the first fantasy writers to feature female main characters, and her books are ideal for seeing strong heroines overcome the odds.

This two-book gift set for third to seventh graders includes The Wild Robot and The Wild Robot Escapes by New York Times best-selling author and illustrator Peter Brown. This book was recommended to me by a 10-year-old boy who told me that The Wild Robot taught him this important lesson: “Don’t underestimate women because they can be powerful.” For readers who love the series, Brown shares a blog post of how The Wild Robot Escapes came together from start to finish.

Seventeen-year-old Ben Fletcher takes a knitting class and it changes his life. A constant worrier, Ben finds that knitting calms his nerves and that’s he’s actually pretty good at it, but he keeps the perceived feminine hobby under wraps so his friends and soccer-obsessed father don’t find out. Written as journal entries from Ben, readers will discover a wide range of male characters who have different perceptions of masculinity.

This YA science fiction novel has been at the top of many best-books lists and won a Michael L. Printz honor. Two star-crossed lovers meet in their dreams. The main male character, Lazlo, is a librarian turned secretary who specializes in fairy tales. He’s not particularly attractive and is poor, but Sarai falls in love with him when she enters his dream state. Author Laini Taylor’s award-winning book shatters the stereotypes of male characters.

Speak was published in 1999 as a way for author Laurie Halse Anderson to deal with the trauma of being raped at age 13. Teaming with comics artist Emily Carroll, Anderson reproduces her story through the visual medium of a graphic novel. Freshman student Melinda is sexually assaulted at an end-of-summer party and starts her freshman year as an outcast when she calls the cops to bust up the gathering. As she retreats further into herself, she stops talking altogether. When her attacker tries to corner her again, Melinda finds a way to speak up for herself. This is an important book for teenagers to discuss with their parents on the issues of consent and assault.
Jennifer Chen
Jennifer Chen is a freelance writer and editor living in Los Angeles. She's written for O, The Oprah Magazine, Good Housekeeping, Real Simple, and several other publications. When she's not cooking delicious vegan meals, she's hanging out with her TV writer husband and twin girls.
Books
Parenting
Books Feminism Gifts Goods
More From Parenting