20 Times We Said “Yes, Please!” to Holiday Foods from Around the World 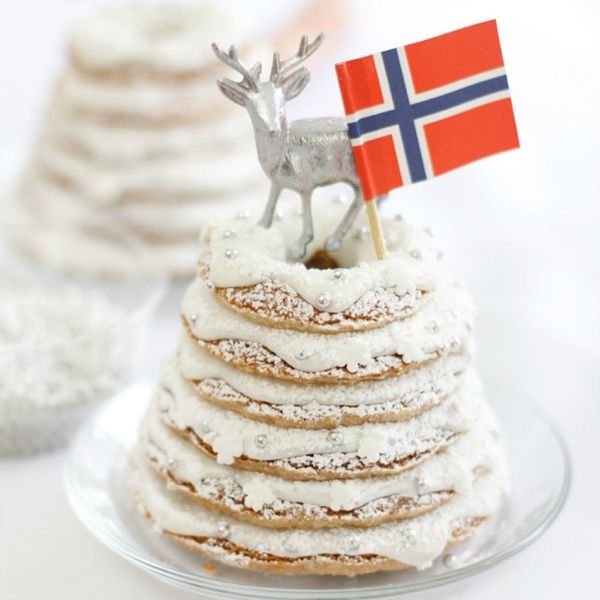 Food plays a starring role in holiday celebrations everywhere. As with all of our delicious eggnog, pumpkin pie and creative candy cane recipes, the holidays simply aren’t the same without ’em. And in case you didn’t know, many seasonal dishes we love actually came over from the old country (along with our grandmothers and ancestors), which makes it all the more fun to see inspo from other lands. Whether your family has had their own traditions for generations or you’re looking for something new to add to the mix, here are 20 holiday dishes from around the world. They’re so awesome that you seriously *need* them in your life right now.

1. A Feast of the Seven Fishes: When Italians do food, they do it in a major way. Christmas Eve in Italy calls for not one but seven dishes, each more delicious than the last. (via Saveur)

2. Kransekake: In Scandinavian countries, wreath cake is traditionally baked for Christmas, weddings and other festive celebrations. The towering treat is a sight to behold and tastes like a big crispy crunchy cookie that’s been caught up in a sugar blizzard. (via Sprinkle Bakes)

3. Doro Wat (Ethiopian Chicken Stew): This traditional African dish is served at major fasting holidays like Christmas and Easter as the first dish to break the fast. Every bite is packed with robust spices and the sweetness of caramelized onion, so it’s totally worth waiting for. (via Immaculate Bites)

4. Pfeffernüsse: These deliciously spiced “pepper nut” cookies are a German Christmas treat. The scent of homemade spice cookies baking will make your whole house smell like Christmas. (via Gourmet Traveller)

5. Julmust and Mustard Skinka: Christmas ham that’s baked in a layer of mustard and breadcrumbs is a tradition in Sweden. This one’s been braised in Julmust — a sweet soft drink that tastes like a cross between root beer and cola — making it so sweet and tender it falls right off the fork. (via Donal Skehan)

6. Spiralized Sweet Potato Latkes: Potato latkes are an Ashkenazi Jewish tradition that caught on in Eastern Europe in the mid-1800s, especially in Poland and the Ukraine, where potatoes were a staple crop. This version is pan-fried with just a trace of oil and is totally gluten-free, so go right ahead and indulge. (via Skinny Taste)

7. Pork Tamales With Prickly Pear & Tequila Salsa: What’s more appropriate for the holidays than food wrapped up like little gifts? The stewed pork meat in these tamales is so juicy, spicy and flavorful, it melts in your mouth. (via He Needs Food)

8. Saffron Buns: These traditional Swedish Christmas buns have a wonderful warm saffron flavor and are dotted with little pops of sweetness from the raisins. Invite some friends over when you make them, because homemade pastries like this simply must be shared. (via Green Kitchen Stories)

9. Rib-Eye Roast & Yorkshire Puddings: Want to know what’s better than fried dough? Dough that’s been crisped in delicious beef drippings. The British love their Yorkshire puds, so it’s a *must* at Christmas and other holidays and special occasions. (via Table Twenty-Eight)

10. Jelly Doughnuts (Sufganiyot): Deep-fried yeasty dough is essential to the holiday lighting ritual in Jewish culture, so jelly donuts became a holiday tradition in all countries where Jewish people reside. This version is filled the traditional way, with jam, but you can sub any filling you like, including Nutella, butterscotch, caramel, pastry cream, lemon curd — the options are limitless. (via Pretty Simple Sweet)

11. Injera: This African sourdough bread tastes slightly sour, slightly sweet and utterly addictive. It’s served with almost all meals, but especially at holidays, when you’ll want to soak up every delicious saucy bite of your doro wot. (via Immaculate Bites)

12. German Christmas Stollen: Weihnachtsstollen is a German yeast bread that’s filled with rum soaked raisins and topped with melted butter and sugar. Have it with butter and a hot cup of coffee as a tasty pick-me-up after Christmas shopping. (via Java Cupcake)

13. Puerto Rican Roast Pork Shoulder (Pernil Asado): In PR, the holiday feast is not complete until the lechon hits the plates. This recipe is adapted from a traditional whole suckling pig roast, and not a drop of savory goodness was lost in translation. (via Saveur)

14. Mexican Buñuelos With Spiced Brown Sugar Syrup: The Christmas fiesta isn’t over until some form of this Mexican fritter dessert has been served. Top yours with syrup and powdered sugar and pair it with hot chocolate for a total sweetness overload. (via Nosh on It)

15. Mint Chocolate Cheesecake Bûche de Noël: There are many versions of the French yule log, and all are adorned with some type of collection of small Christmas figurines, “bark” and “leaves” made of chocolate, powdered sugar snow, almond pine cones or meringue mushrooms. They’re as beautiful to behold as they are to eat. (via Sprinkle Bakes)

16. Pastelillos de Carne (Puerto Rican Meat Turnovers): Pastelillos are a traditional starter served at Thanksgiving and Christmas dinner in PR. A small fried turnover with a crimped edge, they’re filled with ground beef, potatoes, olives and raisins in a savory sauce that’s out of this world. (via The Noshery)

17. Kutia Recipe (Sweet Wheat Berry Pudding): This wheat berry pudding is traditionally served on Christmas Eve in Ukraine and other parts of Eastern Europe. Sweetened with milk and honey, it has a perfect balance of fruit, nuts and poppy seeds to delight your senses. (via Natasha’s Kitchen)

18. The Best Swedish Meatballs: Meatballs are front and center of a Swedish Christmas smörgåsbord, and there are as many ways to make them as there are Swedish grandmas. Just make sure you make a double batch, because the whole gang will be devouring them as quickly as you can bring them out. (via The Recipe Critic)

19. Pierogi With Cabbage and Mushroom Filling: Dumplings are a comfort food much loved around the world and most cuisines have some version. In Poland they’re called pierogi, and this version with meat, sauerkraut and mushrooms is everyone’s fave at Christmastime. (via Garlic Matters)

20. Gingerbread Spiced Mince Pies: Christmas without mince pies would be unimaginable in Britain. This recipe is a good make-ahead that can be brought out and reheated whenever friends pop in. Serve ’em up with some cozy mulled wine and they’re sheer perfection. (via Katie’s Kitchen Journal)

Sally Jones
Sally Jones is a writer and editor living in New York City. She has worked at many websites including iVillage, Ladies Home Journal, More, Parenting, Cosmopolitan, The Knot and YourTango, in jobs ranging from editor to COO. Renovation and interior design are her unhealthy obsessions hobbies. She has renovated every home she's lived in, including the rentals, and like... whoa, who does that? You can catch her at her blog Renov8or.
Christmas
Recipes
Christmas Comfort Food Recipes Foodie recipe roundup
The Conversation
Reviews:
More From Recipes