Joe Jonas Just Debuted a Massive Mustache at the 2017 MTV VMAs and Twitter Is Freaking. Out. 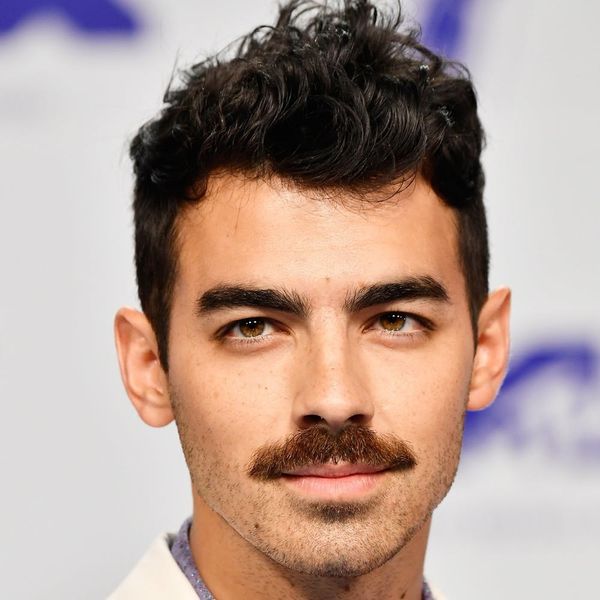 We were expecting to see some wild looks on tonight’s 2017 MTV VMAs red carpet, and boy, did they deliver: Heidi Klum, for one, had jaws on the floor in a naked getup for the books — wowza! The night’s most buzzed-about look, however, just may belong to one Joe Jonas.

The DNCE singer proved he wasn’t afraid of a makeover by getting pink locks post-breakup with Gigi Hadid last January, but his latest transformation had us doing a double take. The 28-year-old hit the stage with Rod Stewart wearing a glow-in-the-dark printed suit and… a giant mustache?

No need to adjust your televisions: That IS indeed the middle Joe Bro sporting a whole lotta’ (neatly trimmed) facial hair. Considering the material being sung — the band got down to Stewart’s 1978 hit “Do Ya Think I’m Sexy” — the radical stubble update may very well have been a nod to its originating era. Then again… maybe not.

#Repost @sirrodstewart Ready to rock with @joejonas and @DNCE tonight at the @vmas! 🎤 #VMA

Twitter was instantly in a tizzy, debating the merits of his newfound look.

Some found it to be insanely babely…

And others… not so much.

A debate also quickly began over which icon Jonas most resembled, with comparisons to everyone from Freddie Mercury to Orange Is the New Black’s Officer Mendez (AKA “Pornstache”) raging.

@joejonas is out here looking like Freddy Mercury. 👨🏻 pic.twitter.com/uxC59yUCYE

Honestly, we can kind of see ’em all!

Joe Jonas’s stache: Yay or nay? Tell us over @BritandCo.