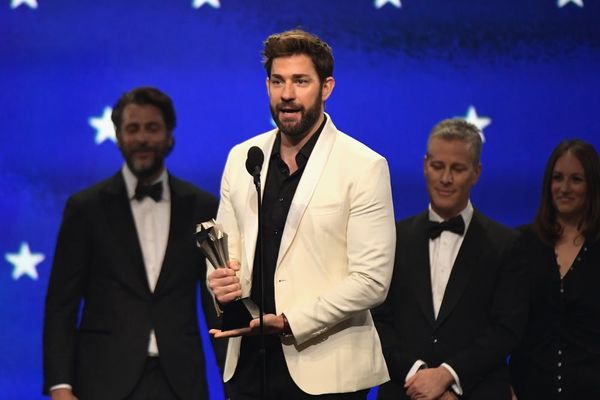 We can’t get enough of John Krasinski and Emily Blunt. At the 2019 Critics’ Choice Awards on Sunday, January 13, the movie-making couple once again proved that they are each other’s biggest fans with a moment on stage that will melt your heart.

“Thank you so much. Wow. I don’t know what’s going on right now. I blacked out about six seconds ago,” Krasinski joked as he stepped up to accept the Best Sci-Fi/Horror Movie award for his directorial debut, A Quiet Place. “I want to say thank you to all the incredible kindness that has been shown to this film,” he continued. “The critics, but most of all, everyone out there that’s seen or loved this movie. It means the absolute world to our crew and to our cast.”

The Jack Ryan star then gave the sweetest shout-out to his wife, who starred alongside Krasinski in the film and took the stage with him to accept the award.

“I got to make a movie about a love story and a love letter to my kids,” he said. “I got to do it with the love of my life by my side, so I’m pretty sure it doesn’t get much better than that. Thank you so much.”

And to make the moment even sweeter, the couple shared an affectionate hug before walking off stage together.

A Quiet Place was not only Krasinski’s directorial debut, but also the first time the couple of 10 years had shared the screen in a movie. He previously admitted he was nervous when he first approached Blunt about starring in the film, but when she said yes — and when he saw her at work — all his fears dissipated.

“The air changes in the room when she starts doing what she does. It’s so honest and so pure and so powerful,” he told Vanity Fair. “It’s like a superpower that she can just unlock and do so specifically with not many attempts. For me, I love acting, and I’m so lucky to be doing it. But she’s on another plane. This weird intersection happened while filming where I totally forgot I was her husband. I was just watching her performance and was lucky enough to be in the front row.”

What do you think of John’s sweet acceptance speech shout-out to Emily? Let us know @BritandCo!