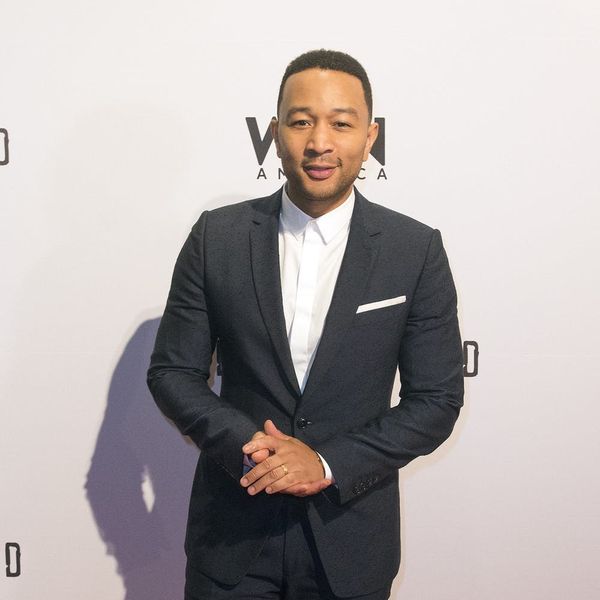 While Hillary Clinton was busy making some very intentional pro-Democratic statements, another famous liberal, John Legend, was making some, erm, rather derogatory ones against President Trump… except it wasn’t really him. (Or at least not all of it.)

The Arthur lookalike says that his Twitter account, which was suddenly rampant with anti-Trump remarks Friday night, was hacked.

Our president is too preoccupied with the crises in Bowling Green and Sweden. He can't speak out against hate crimes by white supremacists. https://t.co/QUC7MJ4QUN

While even wife Chrissy Teigen seemed skeptical, writing back, “Mmhmm,” to Legend’s claim of the hack, the series of now-deleted Tweets that followed were later spoken for by an unverified, now-suspended Twitter user named @Owen755, who reportedly Tweeted from his own account, “That was fun.”

The Tweets in question used plenty of profanity in reference to POTUS, and also made threats against him.

Legend seemed to take the whole thing in stride, saying he’d aim to be funnier so no one felt the need to ghostwrite on his behalf, though he WAS also quick to note that he would never make threats against the President.

I'm back. My hacker was vulgar and kinda hilarious. I'll try to be funnier from now on so he won't feel the need to ghost write for me.

I would never threaten violence to the President. No matter how much I wish he would go away.

He also attempted an air of humor while refuting a Tweet which came from his account that referred to Trump as a Cheeto (though he DID admit to calling him the “Liar-in-Chief” of his own accord).

I wouldn't call him a Cheeto because I enjoy Cheetos.

I did call him Liar-In-Chief. Then my hacker took over to do the Angrier John version of it all.

Apparently, Legend was personally victimized by the hacker, as well, as he changed his bio to include a tagline that was… less than flattering with regard to his “endowment.” An eagle-eyed fan spotted the change and sent it to Teigen (who, of course, because she’s Chrissy, retweeted it for the world to see).

Ay yi yi! It sounds like it was a rather eventful evening in the Legend-Teigen household!

Has your account ever been hacked? Give us the scoop over @BritandCo.

Nicole Briese
Nicole is the weekend editor for Brit + Co who loves bringing you all the latest buzz. When she's not busy typing away into the wee hours, you can usually find her canoodling with her fur babies, rooting around in a bookstore, or rocking out at a concert of some sort (Guns N' Roses forever!). Check out all her latest musings and past work at nicolebjean.com.
Politics
Politics
Politics social media twitter