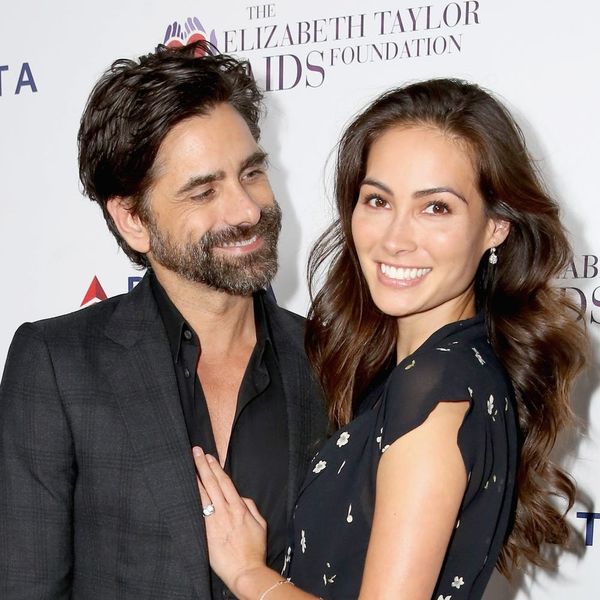 We were over the moon to hear the news that John Stamos, better known to many as Fuller House’s Uncle Jesse, would be getting hitched to his girlfriend of at least a year, Caitlin McHugh, after popping the question at the most magical place on Earth — Disneyland! Now, the 31-year-old model is giving us a glimpse at her gorgeous ring, and can we just say, “Have Mercy!”

The bride-to-be placed her hand on her fiancé’s chest while walking the red carpet for the Elizabeth Taylor AIDS Foundation and mothers2mothers dinner in Beverly Hills on Tuesday, and the sheen of her rock was undeniable.

From the looks of it, the ring is comprised of a stunning emerald-cut diamond flanked with two baguettes atop a silver-toned band. It’s the perfect fit for a fairy-tale princess like McHugh, who is quite the Disney connoisseur — girl can Disneybound with the best of ‘em.

In addition to planning a magical proposal in front of Sleeping Beauty’s castle and a jaw-dropping ring, the 54-year-old has proven he’ll make quite the doting husband. The Grandfathered actor makes pasta runs to cook his lady gourmet (gluten-free!) pasta dishes, a fact he documented with a recent Instagram selfie.

You never know who you’ll run into at the grocery when grabbing ingredients to make a gourmet meal for your gal. @aplusk #whipped

“You never know who you’ll run into at the grocery when grabbing ingredients to make a gourmet meal for your gal,” he wrote on a shot alongside Ashton Kutcher,” adding the hashtag, “#whipped.” What a lucky gal! Maybe he’ll sing his Jesse and the Rippers hit “Forever” to his blushing bride on their big day?

What do you think of Caitlin’s rock? Let us know over @BritandCo.

Nicole Briese
Nicole is the weekend editor for Brit + Co who loves bringing you all the latest buzz. When she's not busy typing away into the wee hours, you can usually find her canoodling with her fur babies, rooting around in a bookstore, or rocking out at a concert of some sort (Guns N' Roses forever!). Check out all her latest musings and past work at nicolebjean.com.
Celebrity Engagement
Wedding Style
Celebrity Engagement Engagement Engagement Rings
More From Wedding Style