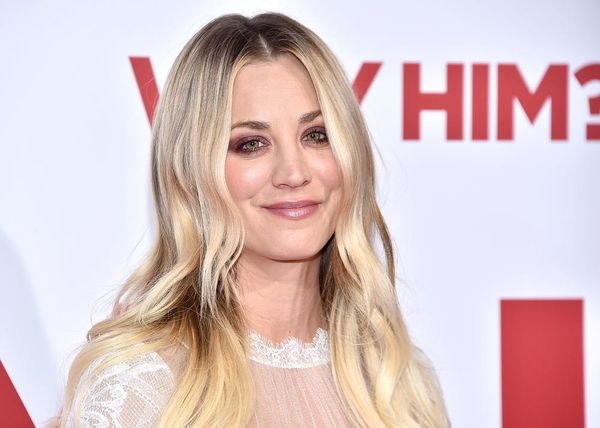 Celebrities are often (unfairly) subject to rumors about their personal lives, which, for women, includes pregnancy speculation. And Kaley Cuoco, for one, is over it. The Big Bang Theory star shut down fan speculation that she’s pregnant — an assumption made based on a photo — with a pointed note about how we judge women’s bodies.

“I’m so sorry I bent over in a way to where my dress billowed in the wind and made you think this,” Cuoco wrote in response to a couple of curious commenters.

Over the past week, Cuoco has shared multiple Instagram snaps from her delayed honeymoon trip to Switzerland with husband Karl Cook. In one photo, the newly(ish)weds are seen leaning in for a kiss with the wide-open nature of Lugano serving as the backdrop.

Because of Cuoco’s pose, some commenters thought her dress gave the illusion of a baby bump.

“Question. Would you walk up to me and ask this straight to my face?” Cuoco added. The note serves as an important reminder that it’s never a good idea to speculate about a woman’s body, or to hide behind the anonymity of social media. (Riverdale star Lili Reinhart also made a point of calling that out when pregnancy rumors plagued her earlier this year.)

Cuoco and Cook are currently enjoying the honeymoon they weren’t able to take immediately following their wedding, since Cuoco spent the week after their nuptials in a hospital bed recovering from shoulder surgery. “When your ‘honeymoon’ is shoulder surgery and your husband looks just as happy lol,” Cuoco shared on Instagram at the time.

The delay didn’t stop the newlyweds from making the best of the situation, though. “Everyone has their own version of a newlywed glow….” he joked on a close-up of Cuoco’s grimacing face. “Well @normancook yours is memorable #shouldersurgeryhoneymoon.”

What do you think of Kaley Cuoco’s response to her commenters? Let us know @BritandCo!