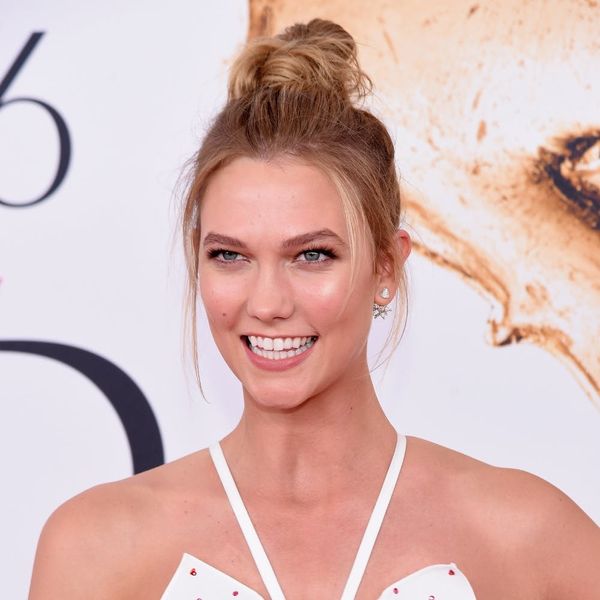 With celebs deciding that this is the season to try something new, stars are changing up their hair left, right and center. Maisie Williams has opted for a summer goth lob, and while Cara Delevingne went for a similar cut, she decided it was best to stick with her signature shade. Now, Cara’s friend and fellow Taylor Swift squad member Karlie Kloss has decided to get in on the makeover fun, but instead of going for the on-trend lob, Karlie went for something a bit different. Fans of the model may be used to a blonde-ish Kloss, but she’s decided that her locks just weren’t light enough and has now gone full-on summery blonde for her latest look.

Posting the pic to Instagram, Karlie claimed she was already noticing a change due to her blonde(r) locks, saying, “I’m already having more fun.” She showed off her perfectly golden shade with super straightened strands — it also appears that there may be a rose hint to the new look, which is super on trend for this season.

We got a second glance at Karlie’s new look in a GIF she posted earlier, and we love that she’s already having a ton of fun with the new style — while hangin’ out in a super cute vintage car. Whether this is a temporary look for Karlie or a transformation she’ll stick with is something we’ll just have to wait and see. *checks her Insta again and again*

Do you like Karlie’s new look or do you think she should try a more drastic change (jet black pixie cut, perhaps)? Tweet us @BritandCo!

Desiree O
Desirée O is a ‘Professional Bohemian’ who loves anything and everything related to the arts, entertainment, and pop culture. She ADORES being a ‘Newsy’ for Brit + Co, covering all of the latest tidbits of awesomeness that you want to read about. When she’s not writing, she’s either making messy art, going on long adventurous walks with her camera, or poking around over at bohemianizm (http://www.bohemianizm.com/). You can find out about Desirée O and her work at http://DesireeO.com/ or follow her on Twitter @DesireeO.
Karlie Kloss
Celebrity News
Karlie Kloss
More From Celebrity News