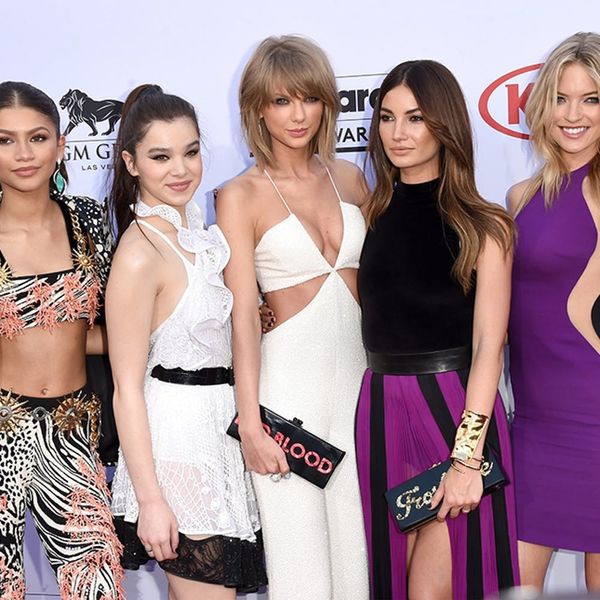 There are plenty of OMG-moments guaranteed to happen at Sunday’s MTV VMAs. Host Miley Cyrus will without a doubt supply a majority of them. The other definite watercooler topic generator will be nine-time nominee and go-to audience dancer Taylor Swift, who will also be premiering the music video for new single, “Wildest Dreams.”

The propartyplanner literally has a rolodex of women she could stroll the red carpet with, from Zendaya, Lily Aldridge and Serena Williams to Hayley Williams, Ciara or Kendall Jenner — and a couple dozen more. Scroll through to see 23 women we’d love to see the crop top lover and professional friend arrive with Sunday night.

1. Ellen DeGeneres: Imagine all the twinning possibilities that could go down between this pair. We’re requesting a matching pantsuit look, ideal for dancing up and down the aisles all night long. (Photo via @taylorswift)

3. Jaime King: We’re sure the mother of Taylor’s godson could use a night off of mommy duty. What better way for a kid-free evening than a star-studded event? We know we’d RSVP yes to that invite. (Photo via @jaime_king)

4. Lena Dunham: Because these girls will definitely shake it off in the audience together all night long like no one’s watching. (Photo via @lenadunham)

5. Selena Gomez: She was her arch-nemesis in the “Bad Blood” video, so it only makes sense they finish the girl-on-girl fighting action with a playful one for that Moonman onstage. (Photo via @selenagomez)

6. Lorde: Honestly, we just miss this lady and want her in our lives more. So drag her along Sunday night, Taylor, please and thank you. (Photo via @taylorswift)

7. Uzo Aduba: The OITNB actress is already a known red carpet knock-out, pair her up with Taylor’s unforgettable style and the duo would without a doubt be tied at the top of every “Best Dressed” list. And if not, we’re sure they’d throw a pie for each other at all the reporters that didn’t love their looks ;) (Photo via @taylorswift)

8. Sarah Hyland: If this snap is any indication about the reaction shots this duo would provide throughout the VMAs, sign us up for a video feed focused solely on them the entire night. (Photo via @taylorswift)

9. Camila Cabello: It wouldn’t technically be fair if this gal, one-fifth of Fifth Harmony, ditched her ladies to hang with Taylor for the night. But the BFFs are just too darn cute together that it would be worth it. (Photo via @camila_cabello)

10. Cara Delevingne: We already know the model and Paper Towns actress had a blast at MTV’s other awards show earlier this summer, so if Tay brought her along she’d be in for a wildly unforgettable evening for sure. (Photo via @caradelevingne)

11. Andreja Pejic: This duo obviously had a blast onstage at Taylor’s 1989 tour so why not continue the party by bringing this model as her plus one for another fun, dance-filled evening. (Photo via @andrejapejic)

12. The USWNT: Bringing the Women’s World Cup champs would require a party bus, but there’s absolutely nothing wrong with that. Especially when you’re Taylor Swift. (Photo via @taylorswift)

13. Serayah: The only thing better than Taylor rolling up to the VMAs with the Empire actress would be if the duo became a trio by arriving with Cookie, aka Taraji P. Henson. (Photo via @serayah)

14. Ellie Goulding: Anything could happen (namely a beyond pleasant evening) if this singer appeared side-by-side with T.Swift. (Photo via @taylorswift)

15. + 16. Martha Hunt + Gigi Hadid: The only thing better than showing up with one model would be making everyone stop and stare and arriving with two. And who better than two of her “Bad Blood” leading ladies? (Photo via @taylorswift)

17. Mariska Hargitay: She named one of her cats after this actress’ most popular role, the least she could do is invite her to the VMAs. Taylor, just make sure not to exclude Ellen Pompeo, the origin of your other cat’s name. (Photo via @taylorswift)

18. Hailee Steinfeld: The Pitch Perfect 2 star *does* happen to be transitioning into a popstar so we’re sure she wouldn’t mind joining one of the world’s most-recognized names for one of her biggest nights. (Photo via @haileesteinfeld)

19. Emma Stone: There’s nothing we wouldn’t give to get a free pass to the Emma + Taylor show. Make it happen, Swift! (Photo via @taylorswift)

20. – 22. The Haim Sisters: Though Taylor isn’t technically a part of the Haim sisterhood by blood, we’re sure she’s an honorary sister. So make it a family affair and bring the trio of sibs along for the ride. (Photo via @taylorswift)

23. Emma Watson: Really we just want to see the #girlbosses that are Hermione + Becky together again obviously. (Photo via @laurenaquilina)

BONUS: Who knows, Nicki + Taylor could pull a fast one on us all and come out of a limo Sunday night hand in hand. #dreamsquadgoals (Photo via Larry Busacca/Getty)

Who do you want to see Taylor Swift brings from her squad to the MTV VMAs? Let us know in the comments.