Kat Von D’s New Shoe Line Could Be Made of… Pineapples and Mushrooms? 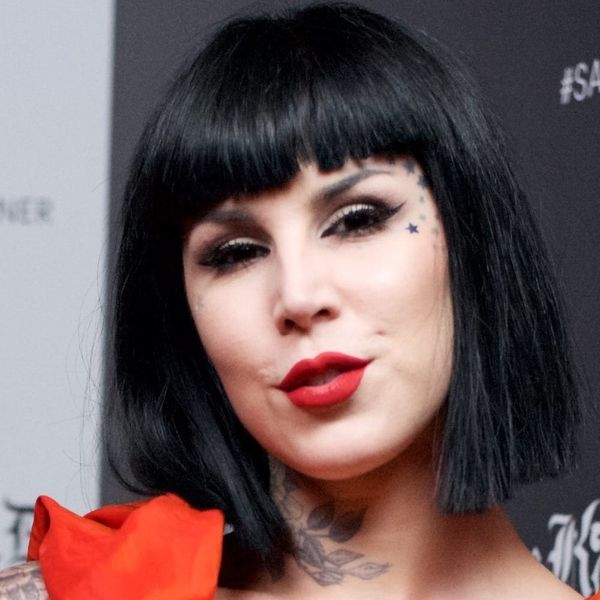 Kat Von D is spawning a fashion empire! The makeup mogul, who has become an innovator in the beauty space, thanks to products such as brushes meant to catch glitter fallout and universally flattering lip liner shades, is now gearing up for a self-funded, vegan shoe line, aptly dubbed Von D Shoes, one of which will have a very cool hidden element.

As Racked reported in its feature piece on the tattoo artist, one of her upcoming collection’s 26 shoes, a boot, will come equipped with — get this! — a hidden lipstick compartment! And that’s not all. It will also be produced in Italy, using all high-end leather alternative materials.

MY NEW #VEGAN SHOE LINE IS COMING TO LIFE! ❤️🙃👠 The first round of prototypes just arrived to my house - here's a tiny little sneak peek of 1 out of the 26 styles I'll be launching with! To all my dear vegan + non-vegan friends, thank you for being so patient! I know how hard it is to find high-quality shoes with style that aren't made from animal leather, fur, or use glues derived from horses+cows, and that you can afford! I've been working hard on getting these shoes perfect for you and hoping to launch the collection at the end of the year! And don't worry, they're not all going to be sky-high platforms - I got every style and sizes covered [including a few unisex pieces 👫]❤️ #comingsoon #vegan #crueltyfree [song: "butterfly caught" by massive attack]

“I’m not interested in looking at cheap plastics,” the designer quipped to the outlet. “We’re looking at all these innovative, different leather substitutes that are made out of mushroom and pineapple and they’re actually great for the environment and look equal to, if not better than leather.”

While the boot’s prototype has yet to be released, the 35-year-old has been giving a glimpse at the shoe line’s development along the way, with shots of unique heels in sculpted, pointed shapes.

Day 1 of working on my upcoming #vegan shoe collection. Sizing up heels for this pair of post-apocalyptic asymmetrical vegan-leather heels I designed. 🖤 #VonDshoes #comingsoon

She also posted a pic of herself on her first day of work for the line back in September, saying, “Sizing up heels for this pair of post-apocalyptic asymmetrical vegan leather heels I designed.”

We, for one, cannot WAIT to see what else she has up her sleeve!

Will you be buying Kat’s new shoes? Tell us over @BritandCo.

Nicole Briese
Nicole is the weekend editor for Brit + Co who loves bringing you all the latest buzz. When she's not busy typing away into the wee hours, you can usually find her canoodling with her fur babies, rooting around in a bookstore, or rocking out at a concert of some sort (Guns N' Roses forever!). Check out all her latest musings and past work at nicolebjean.com.
Shoes
Style News
Shoes Style Vegan Recipes