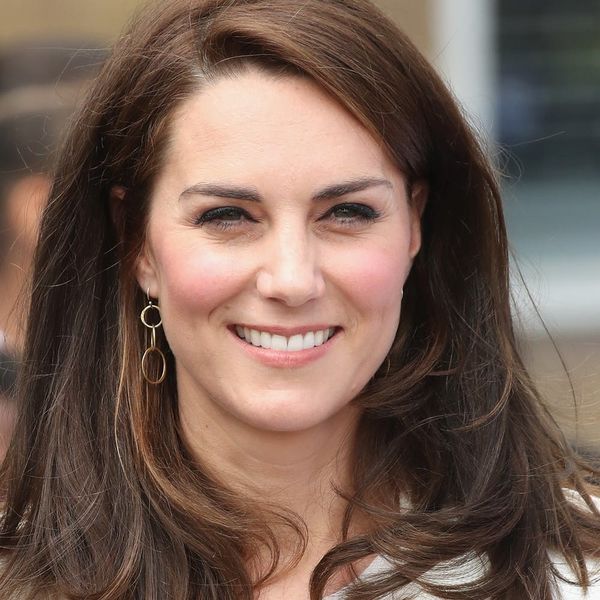 There’s a long-standing theory that Kate Middleton uses major hair changes to distract from pregnancy scrutiny — and her most recent appearance seems to prove that point further. At the Duchess of Cambridge’s second official outing since announcing she’s expecting her third child with husband Prince William, she debuted a shorter style.

For a children’s charity fundraiser in London on October 16, Middleton, in an Orla Kiely pink dress, black clutch, and shoes, wore center-parted locks that grazed the tops of her shoulders.

The lob could just be an optical illusion thanks to her big barrel curls of course, but it seems several inches shorter than it was for World Mental Health Day last week, during which Middleton was *shockingly* body-shamed for not looking “pregnant enough.”

Their Royal Highnesses invited guests from across the country who work in leading mental health organisations. #WorldMentalHealthDay was the perfect opportunity to celebrate their work.

After her appearance, the official royal Instagram account posted a pic of the Duke and Duchess, which elicited some rather harsh comments about her body. “I can’t believe she’s prego, she looks too thin,” wrote one commenter. “Where’s the baby bump? Being as this is her third she should have popped sooner,” wrote another.

While the short style could be a sly attempt to distract critics, Middleton, who is once again battling extreme morning sickness, didn’t seem to be terribly affected by the haters. In fact she showed just how bouncy her hair was as she took a twirl on the dance floor with Paddington Bear.

Do you think Kate Middleton cut her hair even shorter ? Let us know @BritandCo!

Arielle Tschinkel
Arielle Tschinkel is a pop culture junkie who went to NYU because the Olsen twins went to NYU (really). She is a freelance writer whose work has also been featured on HelloGiggles, Refinery29, SheKnows, Bustle, Hollywood.com, and many others; and she's living her dream one Britney Spears GIF at a time. Follow her on Twitter @mrstschinkel or visit her website at arielletschinkel.com.
Celebrity Hair
Hair
Celebrity Hair Haircuts Kate Middleton Royal Family