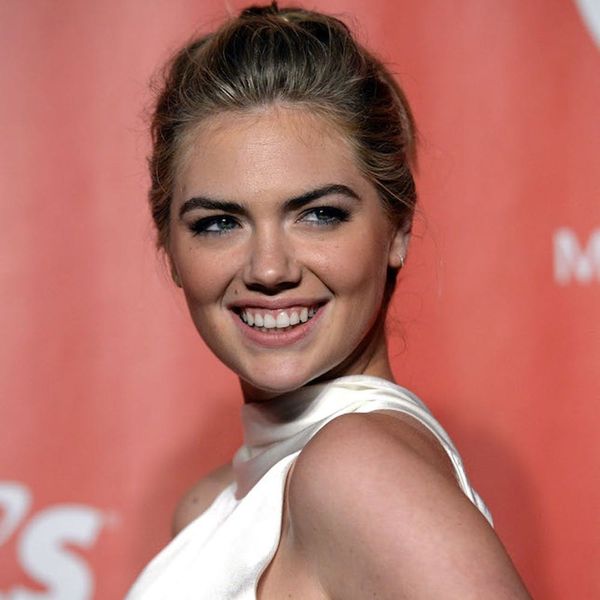 The third time’s the charm for model Kate Upton. She’s Sports Illustrated’s Swimsuit issue’s cover girl again! And she’s on not one but three covers for the March issue. Kate showed off her 2017 cover — or rather, covers — on Jimmy Kimmel Live! last night.

The 2017 SI Swimsuit Covers have been revealed. Welcome back, @KateUpton! Follow the link for more photos and video https://t.co/4cszjybbVp pic.twitter.com/y7TguJdPVD

Last night on the Valentine’s Day episode of Jimmy Kimmel Live!, the 24-year-old model revealed she’s wearing, well, not much. “Is that really a swimsuit you’re wearing?” Jimmy asked. “Because it looks like a hammock that got torn to bits.” To be fair, on one of the covers, Kate is wearing a white rope sitch that does look a bit like a hammock. On the other covers, she’s topless, wearing gold chains and collars, as well as white bikini bottoms with a blue sequin, metallic-y looking top.

“She’s back where she belongs… on the cover of SI Swimsuit,” the magazine wrote on its website, announcing the cover. “It’s a full-circle moment for us,”SI Swimsuit editor MJ Day said. “We started Kate in her career and, you know, we watched her grow and become not only this worldwide superstar phenomenon; she changed the direction of the modeling industry.”

Kate first appeared in the magazine in 2011, when she was named Rookie of the Year. She earned the cover back-to-back years in 2012 and 2013. As a three-time cover model, she joins the ranks of Tyra Banks, Heidi Klum and Christie Brinkley (who appears in this year’s issue alongside her two daughters as well) who have all graced the cover three times in their long careers. The record holder, however, is still Elle Macpherson who has been on the cover five times.

“I was very excited when MJ asked me to be back in the issue,” Kate said. “Especially when this year’s theme is about every woman of every age and every body type being accepted. It was inspiring to be asked to be part of that issue.”

What do you think of Kate’s third cover? Tweet us @BritandCo!