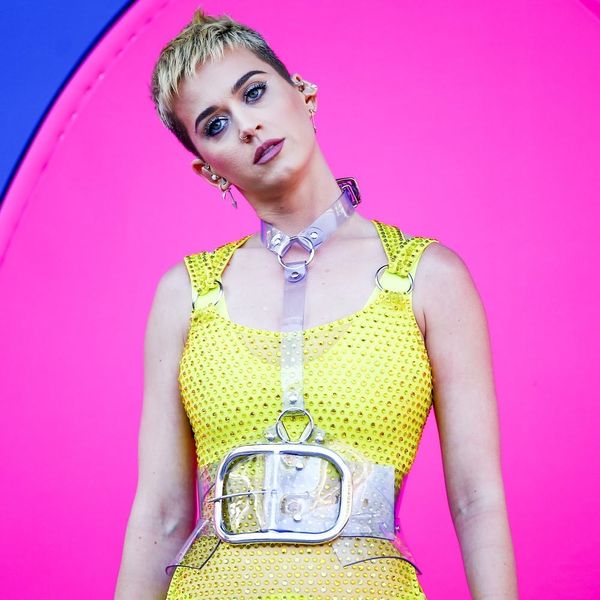 Katy Perry is certainly not afraid to make a statement, whether that means appearing on stage at the Manchester Benefit concert wearing a dress that was a heartwarming tribute to the victims, or facing her feud with Taylor Swift head on. But now, she’s facing a sitch like none other: a sit-down interview with an absolutely adorable seven-year-old.

“How do you go about your outfits?” asked Poppy Browne, the daughter of W Magazine’s features director Alix Browne. With glitter around her eyes, angelically curly hair, and flowers in hand, this NYC second-grader was certainly ready for her big professional debut. She even prompted the superstar along, saying, “Like, do you dress for how you feel or how the song is? Like if the song is sad you wear sort of blue-ish colors?”

7-year-old interviewer Poppy asks @KatyPerry the hard-hitting questions, like, "Do you know how to hula hoop?" https://t.co/Ul8TGFBuUq pic.twitter.com/7ibFItD8Gu

Perry admitted that Poppy was on the mark, telling the young fan, “Actually, you’re pretty much right because whenever I wake up in the morning, I like to dress and represent exactly how I feel. So, sometimes I dress because I feel funny and I want to laugh a lot, sometimes I dress when I wanna flirt… And yes, it just depends on the song, so if the song is happy, or if it’s about food, for instance, I just put food all over my body.”

While the seven-year-old was a little iffy about the food thing, she wasn’t daunted at all by the fact that she was face to face with one of the world’s most famous singers.

7-year-old interviewer Poppy asks @KatyPerry the hard-hitting questions, like, "Do you know how to hula hoop?" Click the link in our bio to watch more.

Perry, on the other hand, admitted that she was nervous, unsure of what she might be asked, and she had every right to be wary. With questions about her hula-hooping ability and her knowledge of worms and caterpillars and butterflies, this is surely one interview the singer will always remember.

Did Poppy’s interview put a smile on your face? Let us know @BritandCo!