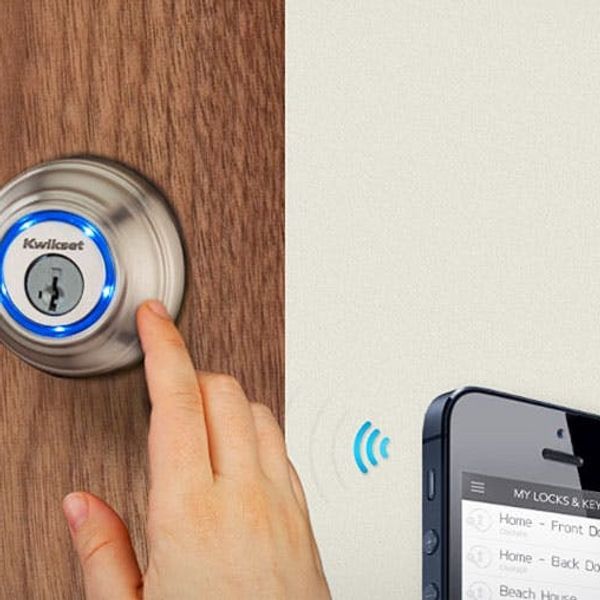 The trend towards the automated home is one that we’re pretty on board with. No, we’re not quite ready for robots to make home cooked dinners, but we do like when those little things you do every single day are made more efficient. Today’s case in point is Kevo, a new digital lock that lets you open your home from your phone.

Kevo turns your iPhone into a simple digital key, powered by Bluetooth. Just have your phone in your pocket or purse, tap the Kevo lock, and say “Open Sesame!” Okay, that last part is optional, but why not tap into your inner magician?

This clever lock first showed up on Shark Tank and, clearly, was a huge success. The dream of Kevo was made a reality when the folks at Kwikset decided to jump on this futuristic bandwagon.

But let’s go back to how it works. You pair your Kevo lock with your phone so that they know each other, via Bluetooth. A ring around the lock lights up blue when it senses you approaching, and turns to green once you’ve touched the lock and unlocked your door. Keyless entry and a miniature light show? We’re in!

Best of all, the Kevo is insanely secure. Besides using Bluetooth’s own encryption, Kwikset says there’s also military-grade encryption at work. The system also boasts passive monitoring capability, meaning it’s smart enough to know if you’re inside or outside your house, preventing others from following you and trying to unlock your door once you’re inside.

How does it work for people who aren’t you? You can easily give people access to your home via the app, even for a designated period of time. And for folks without smartphones? Key fobs! As of now, the Kevo system is only being developed for iPhone 4S and iPhone 5, but will be looking into other smartphone apps soon.

As you can see from the photos, the system also includes a regular old lock and key, meaning if your phone is dead or you simply don’t have it, you can still get in and out of your house the old-fashioned way.

Read more about Lockitron here.
Anjelika Temple
As Co-Founder and Chief Creative Officer of Brit + Co, Anjelika Temple brings her voracious consumption of all things creative and colorful to DIY projects, geeky gadgetry finds and more. When she's not DIY-ing her heart out, you'll find her throwing dinner parties with friends or adventuring with her husband David, their daughters Anokhi and Indira, and their silly dog Turkey.
Tech
More From Tech