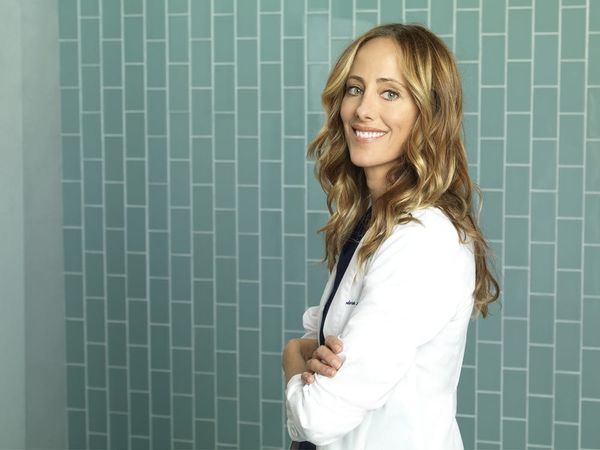 Grey’s Anatomy alum Kim Raver — AKA Dr. Teddy Altman — recently returned to the show as a regular, and in a new interview, the actress opened up about coming back and diving headfirst into one of the show’s trademark complicated love stories.

“It feels to me like going away to college and coming back,” Raver told ET about her return to Grey’s after a five-year absence from 2012 to 2017. “You grow and evolve, and yet you come back to your family and it’s this incredibly loving family, and it really is … It’s the feels, bring all the love back, and it’s complicated and the love triangles. I am just so happy. I am thrilled to be back.”

Raver knows a thing or two about Grey’s Anatomy‘s penchant for dramatic relationships. As we learned in a trailer for season 15 — which showrunner Krista Vernoff has called the “season of love” — Dr. Altman is pregnant. The dramatic angle is that, unbeknownst to Owen (Kevin McKidd), it’s his child, and he is (once again) trying to sort out his tumultuous relationship with Amelia (Caterina Scorsone).

“Teddy doesn’t want to tell anyone because I don’t think she wants to break up anything if something is there,” Raver told ET, adding that the intention of the love triangle is to approach it in a way that it’s “not woman pitted against woman.”

This complicated approach to relationships of all kinds on Grey’s has long been one of its trademarks, and as Raver said, it’s also what makes them so beloved. “Shonda Rhimes always set up a very raw, real, messy, ugly but yet hot and sexy [romance],” she said. “But there’s also humor to it, so I think that makes it different … You’re never just one thing and I think that’s relatable to people.”

Are you happy that Teddy is back — and in a love triangle! — for season 15? Let us know @BritandCo.