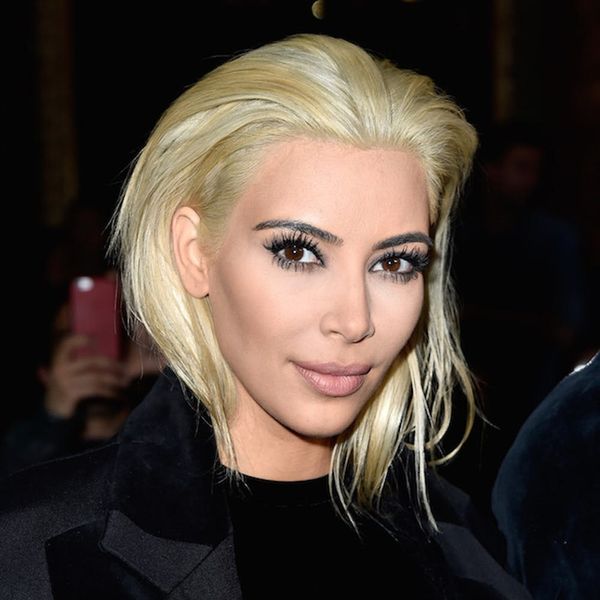 1. Okay, maybe Kim’s naked selfie didn’t break the Internet, but this Twitter rant might do it. We predicted yesterday that Kim Kardashian’s naked post-baby-weight-goals selfie might #BreakTheInternet, and while it certainly elicited a kajillion responses — some hilarious — we didn’t think it would happen because she would call out other celebs like Bette Midler and Chloe Grace Moretz in a very Kanye-like Twitter storm.

Bette Midler had made a joke that if Kim wanted to show us something we hadn’t seen before, she might need to swallow her phone. (!!!) Meanwhile, Chloe Grace Moretz said that Kim needed to be a better role model — so Kim dragged her in as well.

let's all welcome @ChloeGMoretz to twitter, since no one knows who she is. your nylon cover is cute boo

Yikes. Who gave Kanye the keys to this account?!

2. This toddler who called 911 because of a “pants emergency” is all of us. A Greenville County, SC police department got an unusual call this week when a toddler who was having trouble getting her pants on thought she should make a call for emergency help. “Dispatch actually gave us a call and they said it sounded like a baby on the phone and it was basically a 911 hang up call,” Deputy Martha Lohnes told WSPA news. “The door opened up and she comes running out to the front with half a pant leg on and she’s just like ‘HEY!'” The best part? After she got the help she needed, little Aliyah wouldn’t let the officer leave because she wanted hugs. Dead.

3. This dating app is putting abuse survivors right in your feed in a new anti-violence campaign. Happy International Women’s Day, all. It’s a good day to celebrate the amazing women in your life, and think of the ones around the world who still fight every day for their rights. It’s also a good day to remember the vile statistic that one in three women has been abused at some point in her life, a figure that dating app Happn is putting smack dab into users’ feeds in a campaign to end violence against women. Happn helps connect users with people they’ve already crossed paths with, and it hopes the bleak images and #OneInThreeWomen campaign forces users to think about how they likely know an abuse victim without even realizing it. According to a statement from Happn’s cofounder and CEO Didier Rappaport, he hopes it helps “[make] the connection between overlooked survivors of violence against woman [sic] and all the rest of us who otherwise pass them by every day.” [h/t Refinery 29]

Question: "You and @GlennJMurphy must have been told @Adele was going to call you up onstage?" Response: pic.twitter.com/vYLI5D4tW7

4. Adele invited these two fans who covered her songs on YouTube on stage to sing, and now we’re all crying. Have you ever wondered what it takes for Adele to cry the way you do when listening to her music? Turns out the answer is also… her music. After seeing a YouTube video of two men from Ireland beautifully performing a medley of her songs, Adele surprised them by inviting them on stage at the Dublin stop of her world tour to kick out the jams. Adele stood back, beaming and getting emotional, as their beautiful voices on “Someone Like You,” “Turning Tables,” “Hello,” “All I Ask” and “When We Were Young” proved why she felt them worthy. Watch the performance here. [h/t Harpers Bazaar]

5. Please let these old MySpace comments of Taylor Swift’s be real. PLEASE. If you’re of a certain age, you definitely have Internet ghosts. There’s nothing you can do about them, except pray every day that no one finds your old Live Journal or message board missives. Taylor Swift is no exception and, according to BuzzFeed, has spent some time writing very teen things to her friends on Myspace back before it completely changed. (Are you shocked?! We’re… totally not shocked.)

There are screencaps of multiple inside jokes, sweet teenage friendship love and even some threats to friends to take down ugly pictures of her. There’s been no confirmation that these screencaps did indeed belong to Taylor, but one can dream, yeah? (We need this especially after confirming that the above photo is from a 2009 appearance on CSI and not, in fact, a primo emo Myspace selfie. Sob.) [h/t Buzzfeed]