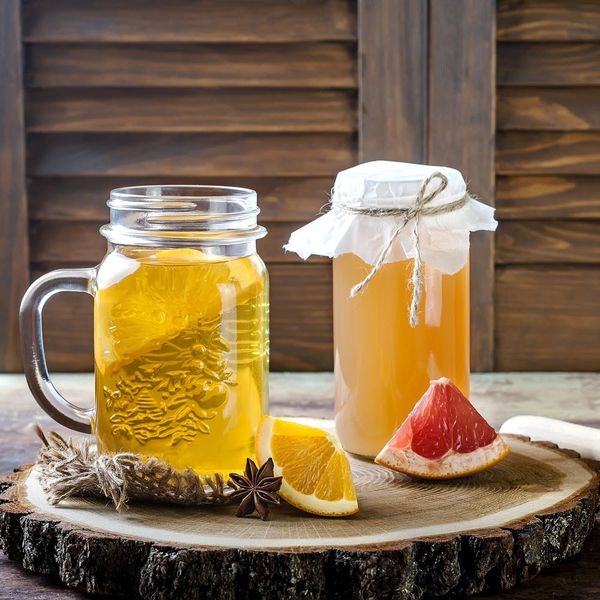 Ever wanted to brew your own kombucha? These days, Pinterest is overflowing with recipes for the super-trendy fermented tea drink, and for good reason. Kombucha is one of the healthiest caffeine options available, making it a great alternative to your latte addiction. And with all that fizz, it’s also the perfect base for stirring up healthy cocktails, so you could easily drink the stuff morning to night. But have you ever wondered why kombucha is considered so good for you? Us too — so we checked in with the experts to get beyond the hype. Here’s what you need to know.

1. Researchers know more about kombucha than ever — but they’re still learning. Kombucha may be trendy, but it definitely isn’t new. Kristina Campbell, author of The Well-Fed Microbiome Cookbook and co-author of Gut Microbiota: Interactive Effects on Nutrition and Health, says that the current kombucha craze is more like a rediscovery. “People of the generations before us drank various fermented beverages because they were safe, and because they tasted good,” she says. “Replacing them with other kinds of drinks (like sugary sodas) is a relatively recent phenomenon in the Western world.”

And those previous generations were just as into kombucha’s health benefits as we are. Dr. Chad Gonzales, a board-certified gastroenterologist, reports that the drink became super popular during the ’60s, when “researchers in Switzerland reported that drinking Kombucha was as beneficial as eating yogurt.” But the doctor points out that, despite this history, we don’t have a lot of high-quality studies to back up the health claims. In fact, a lot of the research to date hasn’t even involved human subjects.

According to Registered Dietitian Nutritionist Anna Mason, the sparse scientific evidence makes it tricky to take a side. “A few studies on kombucha have suggested that it may possess both antioxidant and antibacterial properties that could potentially lower cholesterol, mediate cell damage, and prevent or fight a few disorders or infections,” she says. But because those studies were mostly carried out on animals instead of people, “we cannot conclude anything more than a decent possibility of health effects.”

2. The drink can pack a probiotic punch — if you pick the right bottle. “There are two kinds of kombucha,” says Campbell. “The kind with a wild mix of microbes resulting from the fermentation process, and the kind with probiotics added in specific amounts after fermentation for some demonstrated health effect.” While all kombucha contains some microorganisms — they play a role in the drink’s transformation from plain old tea to fizzy, tangy deliciousness — not all bottles contain probiotics, Campbell explains. At the grocery store, she says, you can identify the probiotic kind by looking for bacterial strains and amounts on the label.

So, let’s rewind for a sec to talk gut bacteria and why probiotics matter. “Trillions of bacteria call the human gastrointestinal tract home,” says Dr. Gonzales. Some bacteria are good, others, not so much. “The good bacteria or symbionts help maintain a healthy bacterial count and crowd out bad bacteria,” he explains.

And probiotics definitely fall under the “good” category. “According to an agreed-upon scientific definition, probiotics are live microorganisms that produce a health benefit when taken in sufficient amounts,” says Campbell. “So they have met a scientific standard that links them with some aspect of health.” Those health benefits vary from one probiotic strain to the next, but will usually have something to do with digestion and immunity support.

3. It’s not right for everyone. “Kombucha tea should not be consumed by pregnant or lactating women,” says Dr. Gonzales. That’s because fermented tea tends to include a very small amount of alcohol — no more than 0.5 percent if brewed correctly, according to Mason. The RDN also suggests that immunocompromised folks give the drink a pass. “If your immune system is already quite frail, you probably don’t want to mess with anything unpasteurized unless you have your doctor’s go-ahead,” she says. And to reap the full benefits of the drink, Mason believes that you do need to opt for an unpasteurized version. “Pasteurization will kill a good chunk of that good bacteria that is the whole reason it is worth drinking,” she says.

4. Store-bought might be safest. Mason cautions home brewers to proceed with extreme care. “Without great food-handling practices, you can find your homemade kombucha to begin containing bad bacteria instead of good,” she says. The RDN also points out that when a batch is brewed for too long, it may become overly acidic or see an increase in its alcohol content. “[You] want to choose a kombucha where the reward potential is much greater than the risk potential,” she says. If you do opt for the DIY route, follow a trusted recipe.

Dr. Gonzales points out that there have been a few cases of lead poisoning related to the home-brewing process. He recommends picking a fresh product with few artificial ingredients, a lower sugar content and a longer fermentation cycle. Additionally, he suggests opting for products stored in glass bottles — the darker the glass, the better.

5. We’re still *pretty* sure it’s good for you. Despite some healthy skepticism, the scientific community seems optimistic about kombucha’s potential.

Campbell points out that while tea is already loaded with health benefits, kombucha has additional, positive nutritional considerations. “When you drink tea in its fermented form, you are adding to the mix of friendly microorganisms in your gut,” says Campbell. “A greater diversity of these microorganisms has been linked to a lower incidence of major chronic diseases like obesity and diabetes, inflammatory bowel disease, and heart disease.”

And Mason is encouraged by the existing studies — even if she is reserving judgment until more information becomes available. “As I looked at the research so far, I found enough evidence to compel me to drink kombucha a few times a week but not enough to drink it religiously,” says Mason, who also brews her own. “In my opinion, the potential for good outweighs the potential for harm.”

Are you a kombucha convert? Tell us @BritandCo!