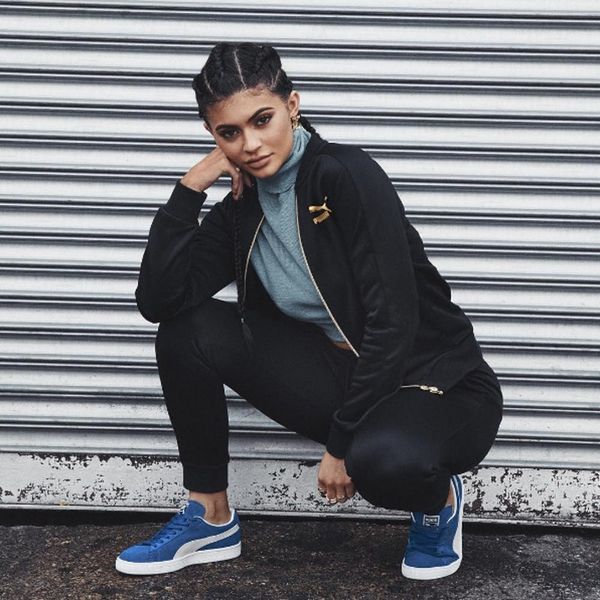 Nabbing plump endorsement deals is a huge part of what the Kardashian-Jenners are all about. But when that deal happens to be with a family rival, things can get a little sticky. This is what happened when Kylie Jenner (who just received an insane present from Tyga for her 19th birthday) inked a contract with Puma, famous for collabs with top celebs like Rihanna, whose Puma Fenty trainers have been a wild success. The problem is that Puma just happens to be a direct competitor of Kanye’s work with Adidas. Yeah. And though the peeps involved stayed relatively quiet at the time, Kim K has now revealed that the business deal did indeed spark drama within the famous fam.

On their recent trip to Cuba, a family lunch turned into a bit of a vocal bizness brawl when Kim brought up the fact that her hubby “had no idea” that Kylie was working with Puma “until the shoot was already happening.”

We were given a glimpse of the conversation via Keeping Up With the Kardashians. Khloé was sympathetic to Kim and Kanye’s sense of betrayal, saying, “I don’t agree with going against the family. Mom and/or Kylie should have presented it to Kanye first.” As “momager,” Kris Jenner is the one responsible for Kylie’s business wheeling and dealing.

Kim added, “Kanye had Kylie walk in his first two shows, he really believed in her as part of his brand.” Oh, so this is a brand thing and not a family loyalty thing? Perhaps it’s a bit of both.

Get your crew looking smooth as ever in #Suede. Call up your squad. Then head to @PUMAWomen to find out more.

Kim continued, “I get my mom’s job is to get us deals … but everything has to be really carefully played out and I feel like this was a conflict of interest.” While back in LA, she finished up by revealing a bit about the family dynamics. “I just wish my mom spoke about it with us. We should all be able to communicate so we don’t step on anyone’s toes.” Fair enough.

The smoothest game on the street. The go-to for every game-changer. The PUMA Suede keeps it fresh and fearless. Like @KylieJenner.

Kris, of course, wasn’t about to stay out of it, adding her two cents with, “I run a business and the biggest part of my business it to pay attention to everyone involved… and the best first for each one of my clients.” Oh, so this is a client thing and not a family loyalty thing? Again, perhaps it’s a bit of both. That would seem to be the case with Kris, who explained to Kim: “Sometimes it’s about a business decision.”

Kim isn’t so sure about that. “Sometimes when you’re dealing with family, it’s not really about a business decision.” Touché! At any rate, it seems like this conflict isn’t quite solved yet — but if we know anything about those Kardashian-Jenners, we know they’ll figure out some way to make it all better.

Do you think it was okay for Kylie to work with Puma, or did Kris make a biz/fam faux pas? Tweet us @BritandCo!