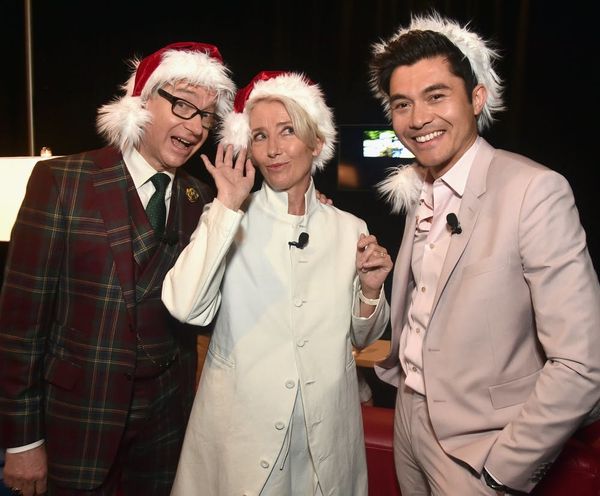 The holiday season can’t come soon enough! We’ve been looking forward to Emilia Clarke and Henry Golding’s Christmas rom-com since the project was first announced in September 2018, and thanks to some new details out of CinemaCon, we are officially counting down the days until its November 15 release.

Golding joined director Paul Feig and screenwriter Emma Thompson — yes, that Emma Thompson! — at Universal Pictures’ CinemaCon presentation in Las Vegas, where they channeled their inner Santas by giving out candy canes and treating attendeesT to the first trailer for the film.

Although it hasn’t been released to the public yet, Entertainment Weekly reports that the sneak peek introduced Kate (Clarke), a down-on-her-luck singer who returns to London and takes a job at a year-round Christmas shop, despite her general disdain for the holidays. Kate’s boss (Golding’s Crazy Rich Asians costar Michelle Yeoh) deems her a lazy elf, but things start looking up when she meets Tom (Golding).

Thompson explained how the movie came about, revealing that it was inspired by the Wham! song of the same name. “I was asked if I would like to write a story based on the song ‘Last Christmas,’ and I said no, not really, because I didn’t really like the song,” she said, according to EW. “Then I thought of the lyrics, ‘Last Christmas, I gave you my heart,’ and I think I could think of something, and we spent seven years writing this story.”

When Feig came on board, he brought along Golding, whom he’d previously directed in 2018’s A Simple Favor. Filming started just a few months after that movie hit theaters.

“We were in the UK and it was the longest Christmas I’ve experienced, filming from December to February, filming in the streets of London,” Golding said at CinemaCon. “It’s a love letter to that city.”

RELATED: A Simple Favor’s Henry Golding Says People Might Be Surprised to Learn This About Him