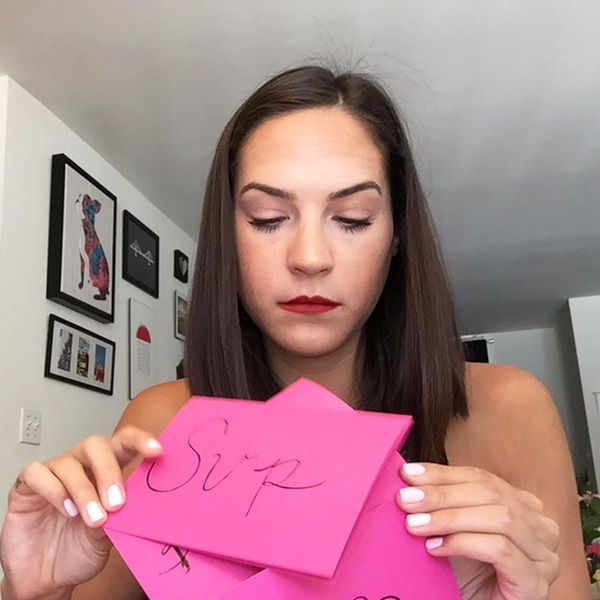 Remember that line that gave you chills from The Breakfast Club? It was at the end of the flick, the sign off from the newly formed group’s manifesto, claiming that their principal had defined Molly Ringwald + Co: “in the simplest terms, in the most convenient definitions: a brain, an athlete, a basket case, a princess and a criminal.” You probably could relate to at least one of those “definitions” back in middle/high school, and maybe even still now.

Abby can relate. Abby was an athlete who turned to sports in middle school when she didn’t get into art club. A decade+ later, Abby still didn’t consider herself artsy. Well, ’til we came around with a challenge. And a calligraphy set. And a creative workout. That last one is right up Abby the Athlete’s alley… right?

Abby Wischnia, a 25-year-old Texan living and launching a dog company called Brentwood Barks in Los Angeles, CA, is a familiar face around Brit + Co HQ. A really familiar face. That’s kind of because she is the twin sister of our former Editorial Intern, current Associate Editor and forever Brit + Co enthusiast Beth Wischnia (yes, they were the stars of our twins Halloween costume post). As is cliche to say about twins, the similarities stop with their appearance. While Beth lives and breathes DIY, Abby was jumping into something totally new and a little scary taking on the #iamcreative challenge.

She documented the “workout plan” we put her on, completing one hour of her new creative pursuit (calligraphy!) every day for a week, and, along with five fellow women all exercising creative muscles they had never used before, let us film her progress, her frustrations and her adventure.

You can see how Abby’s “absolutely atrocious handwriting” is lookin’ pretty darn pretty these days, but watch the video to see how she got there. Warning: You WILL get inspired <3

If you had a week to spend doing something creative for an hour a day, what would you do? Share with us below and tag us in your creative pix using #iamcreative on Instagram, Twitter and Facebook!

Lisa Raphael
In her past professional lives, Lisa has served the masses as the Editorial Director at Brit + Co, Bieber Whisperer at J-14, Golden Girls Fan Club Prez at Lifetime and Talk Show Host Understudy to Katie Couric. Now, she's taking on the sports world at The Relish, teaching Hairography 101 in her spare time and will forever be trying to fill the hole Zayn Malik left in her heart.
#iamcreative
Brit + Co Planners + DIY Kits
#iamcreative Calligraphy