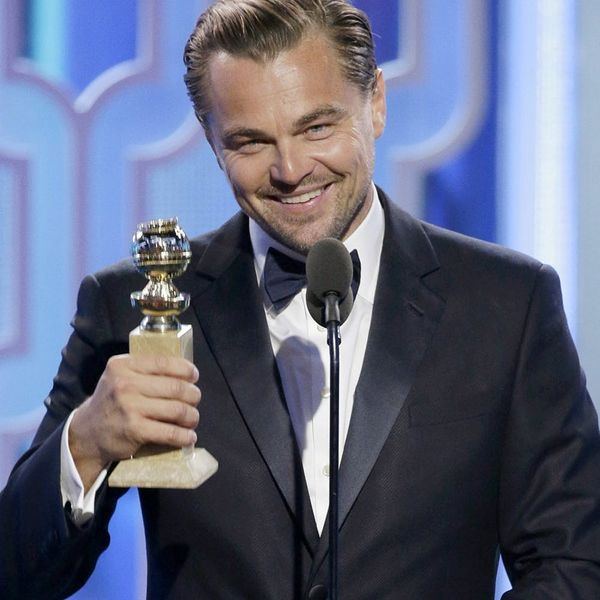 Last night’s Golden Globes was packed full with oh-so-many OMG moments. Between Katy Perry’s bump-it hairstyle, Ricky Gervais’ jokes and that moment when Ryan Gosling and Brad Pitt made literally ALL of our celebrity dreams come true, we’d even go as far as to say it might have been even more entertaining than last year’s outrageous MTV Awards.

But even though there were a number of impressive wins and a few upsets, the Internet isn’t abuzz today with any of that. Instead, they’re collectively focused on one thing: that awkward moment when Leonardo Dicaprio accidentally nudged Lady Gaga on her valiant walk up to the stage.

As you can see in the Vine, a lucky cameraman happened to be filming Leo just as Lady Gaga squeezed past him to go and accept her award. It seems as though Leo wasn’t exactly paying attention to what was going on because he was definitely surprised when his elbow was knocked by the Countess.

After the show, ET interviewed Leo and informed him that the face he pulled had already gone viral. His response? “Oh, lord, that’s trending, huh?” Leo went on to say “I just didn’t know what was passing me — that’s all! I was like ‘woah!'”

Now, Leo we definitely appreciate you being a good sport about Internet’s strange fascination with your face, but when you’re talking about a Golden Globe-winning actress, you might want to refer to her as a “who” rather than a “what.” Additionally, this whole fiasco could likely have been avoided by pausing the jokes for a sec to listen to see which actress was about to head up to the stage. But hey, to be fair, if we were in a room full of movie stars we probably wouldn’t be able to cut the chit chat either.

Gaga? She stayed classy as ever, choosing to focus on what her win meant to her vs serving up Leo with a deserved side-eye. She posted props to Versace for outfitting her for the night along with the following message on Instagram: “I am so grateful to the Hollywood Foreign Press. Thank you Taylor for being right there for me the whole way through. Monsters, never lose hope in yourself. This is for my brilliant manager @wanaynay Staying in the fight is the true test. Never give up on your dreams.” High road: taken.