Lindsay Lohan Says She Was “Racially Profiled” for Wearing a Headscarf 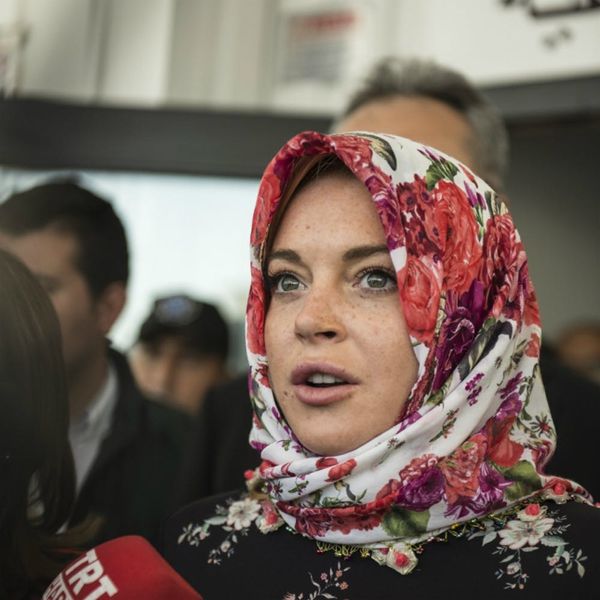 Lindsay Lohan has been having a renaissance of sorts lately. After her hilarious turn hanging up on an Australian radio show and her return to social media just to lay it down for President Trump, she’s been less of a troubled starlet as of late and more of a vocal advocate for human rights, including, it seems, her own — according to the actress, she was just profiled at the airport for wearing a headscarf.

While traveling through London’s Heathrow Airport, the actress told Piers Morgan on Good Morning Britain that she was “racially profiled” and asked to remove her headscarf. But it wasn’t just about Lohan. While she complied with the request, she understood that women who do not feel comfortable removing their scarves due to their religious beliefs could potentially be harassed. “… what scared me was in that moment — how would another woman who doesn’t feel comfortable taking off her headscarf feel?”

While most people feel for LiLo and her awful experience, they’re also reminding her that wearing a headscarf or hijab is not “racial” when you are white.

while i do believe Lindsay Lohan was profiled at the airport but damn white people need to learn the difference between race and religion.

Still, considering that Lohan now travels regularly with her own copy of the Quran after possibly converting to Islam and spends a lot of time in the Muslim majority nation of Turkey (hence the headscarf), we appreciate that she’s taking the time to understand the viewpoints of others.

It’s entirely possible that she’ll become even more of a social activist stateside after seeing the way that minority religions are treated at home, and for that, we commend her.

Have you ever been profiled while travelling? Tell us about it @BritandCo!

Kat Armstrong
Kat has been a writer, social media maven and mom for longer than she's willing to admit. She's also spent time in front of and behind the camera, interviewing celebs, politicians and acting as a producer for fashion and artistic photography shoots. When she isn't writing for various orgs and publications, she's hanging with her kids, husband and French Bulldog, Peter, in Toronto, Canada.
Controversy
Celebrity News
Controversy Politics