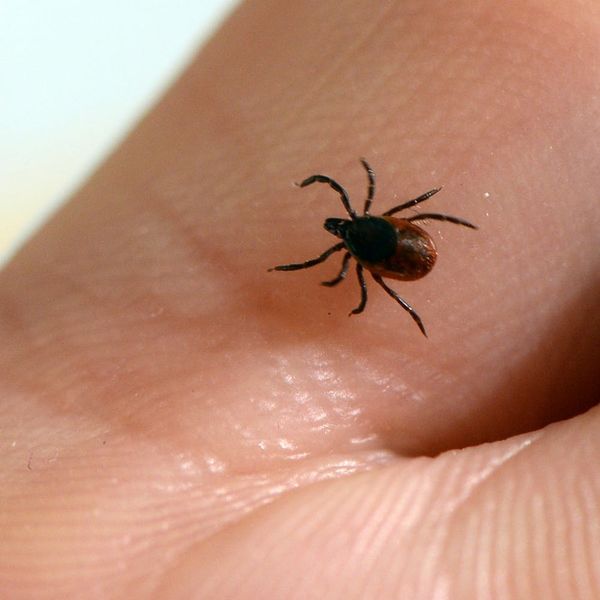 Earlier this month, the CDC announced that illnesses caused by mosquito, tick and flea bites tripled between 2004 and 2016. Diseases from ticks, in particular, are popping up in new regions around the country. The number of reported cases of Lyme disease, which is caused by the bite of an infected tick, is rising. RUN FOR THE HILLS! (Actually, don’t; that’s where the ticks are).

The headlines are scary, so how freaked out do we really need to be about these bugs biting and infecting us? It turns out that while there are legitimate reasons for concern, a little bit of education and a few common sense precautions will help keep you safe.

“We’re living in a more-ticks-in-more-places world,” says Thomas Mather. A professor in the Department of Plant Sciences and Entomology at the University of Rhode Island and a tick and Lyme disease expert, Mather says that the message is clear: ticks are getting around, and the diseases they spread are on the increase.

“This means more people are being exposed, and in new places,” says Mather. “We need to change the level of tick literacy across North America.”

So, let’s get literate!

Lyme disease can cause long-term neurological damage if untreated with antibiotics right away. Early symptoms include fever, chills, headache and joint aches, and swollen lymph nodes. The most telltale sign is a bullseye rash that appears in about 70 to 80 percent of cases and begins at the site of the bite, spreading outwards.

The good news is that a tick needs to be attached to your skin for 36 to 48 hours before the infection can be transmitted. Seems like a long time to not notice a beetle-like insect burrowed into your skin, right? What most people don’t know is that many infections are caused by ticks in their immature nymph phase, when they can be as small as a poppy seed (the CDC actually caught some flack for an ad featuring a poppyseed muffin speckled with ticks).

About 30,000 cases of Lyme disease are reported to the CDC each year in the US, though it estimates the number of diagnosed cases is closer to 300,000. Of those cases, almost 95 percent are reported in 14 states: Connecticut, Delaware, Maine, Maryland, Massachusetts, Minnesota, New Hampshire, New Jersey, New York, Pennsylvania, Rhode Island, Vermont, Virginia, and Wisconsin.

Yet as numbers rise, infected ticks are spreading to neighboring states and can now be regularly found in parts of Northern California, Oregon, and Washington. Lyme infected ticks have now been found in almost half of the counties in the US. If you’re worried about where you live, or where you plan to travel, Mather recommends visiting the website https://www.tickreport.com/, which reports tick activity across the country in two-week intervals.

“Spring is the worst time for ticks,” says Mather. “That being said, it’s hard to predict how bad a particular year will be, in a particular place. It’s always good to check.”

So what can the average person living in a high-risk area do to avoid getting infected? The first is a daily tick check, examining the entire body front and back in the mirror for any small black dots or bite-like protrusions. Particular attention should be paid to the hairline, belt line or underwear line — ticks usually crawl up your body from the ground and will attach wherever they hit an obstacle. If you’re going hiking or just planning on doing some work in the garden, wear tick repellant clothing and footwear. Though it may not look cool, tucking pants into socks is a good way to keep ticks away from your skin. You can treat your outdoorsy clothes with a chemical called Permethrin, or buy special pre-treated clothing.

And if you do find a tick, don’t destroy it.

“It’s not good enough to say that a tick was on me and I got it off and flushed it away,” says Mather. “You need to know what kind of tick it was. What stage of development was it at?”

This is especially true if you found the tick attached to your skin. Search the internet and you’ll find all manner of horrifying tick removal methods (don’t do this). The best practice method is simple: get a pair of needle nose tweezers and grip the tick by the body just below the head, pulling it off in one piece. You can then send the tick in for testing to the folks at Tickencounter.org, where they will tell you if it carried any diseases like Lyme.

So don’t panic, but if you do live in a high-risk zone, take precaution. It’s true what they say: ticks suck.

Lia Grainger
Lia Grainger is a freelance journalist and reluctant nomad who divides her time between Canada and Spain, weather dependent. She's written for The Atlantic, Reader's Digest, the Toronto Star and other print and online publications, and her work appears in dozens of languages around the world.
Taking Care
Womens Health
Taking Care Womens Health