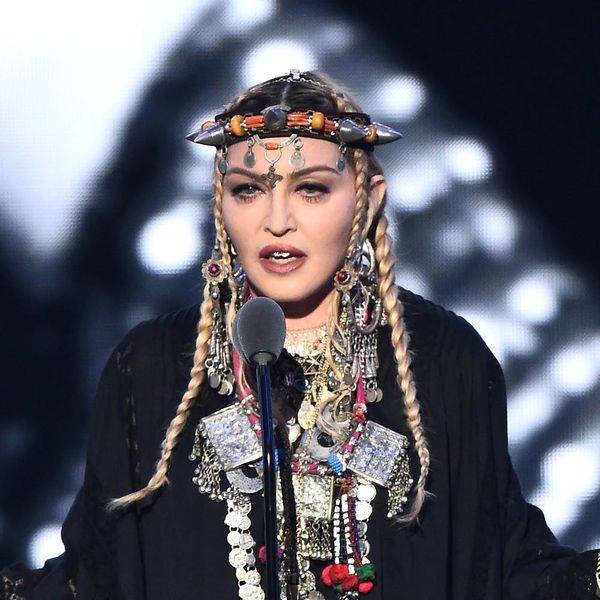 After delivering a speech honoring the late Aretha Franklin at the 2018 MTV VMAs on Monday, August 20, Madonna faced backlash from people who were upset that she spoke more about herself than about the Queen of Soul. So on Tuesday, August 21, the “Material Girl” singer took to Instagram to respond to the criticism and defend her remarks.

“Just to clarify: I was asked to present video of the year by MTV! And then they asked me to share any anecdotes I had in my career connected to Aretha Franklin!” Madonna wrote on Instagram alongside a picture of herself and Video of the Year winner Camila Cabello.

“I shared a part of my journey and thanked Aretha for inspiring me along the way. I did not intend to do a tribute to her! That would be impossible in 2 minutes with all the noise and tinsel of an award show. I could never do her justice in this context or environment. Unfortunately, most people have short attention spans, and are so quick to judge. I love Aretha! R.E.S.P.E.C.T.”

She went on to praise Cabello too. “I love Camila! Congrats!” she wrote. “I LOVE my dress! AND. I love-L O V E!! And there is nothing anyone can say or do that will change that.”

In her VMAs speech, Madonna recalled a time early in her career when she sang a song by Franklin in an audition. “Aretha Louise Franklin changed the course of my life,” she began. “I left Detroit when I was 18, $35 in my pocket. My dream was to make it as a professional dancer.”

Like most people in showbiz, she experienced a lot of rejection — until “two very large French record producers” asked her to perform a song after she had tackled a dance audition. Madonna explained that even though she hadn’t prepared anything ahead of time, she opted for “(You Make Me Feel Like) A Natural Woman” — one of Franklin’s big hits in the 1960s — because she knew the song by heart.

“I could see that they did not take me seriously. And why should they? Some skinny-ass white girl is going to come up here and belt out a song by one of the greatest soul singers that ever lived? A cappella?” Madonna recalled. “I don’t know what came over me. I walked to the edge of the pitch-black stage, and I started singing.”

Weeks later, Madonna got a call from one of the producers, who told her, “We think you have great potentials. You are rough for the edges, but there is good rawness. We want to bring you to Paris and make you a star.”

Madonna did move to Paris for a while, but she eventually decided that particular opportunity wasn’t right for her. That audition put her on the road to a music career, though. “So, you are probably all wondering why I am telling you this story. There is a connection. Because none of this would have happened, could have happened, without our lady of soul. She led me to where I am today,” the singer told the VMAs audience. “And I know she influenced so many people in this house tonight, in this room tonight. And I want to thank you, Aretha, for empowering all of us. R-E-S-P-E-C-T. Long live the queen.”

What do you think about Madonna’s response to the backlash over her Aretha Franklin speech? Tell us @BritandCo.

Desiree O
Desirée O is a ‘Professional Bohemian’ who loves anything and everything related to the arts, entertainment, and pop culture. She ADORES being a ‘Newsy’ for Brit + Co, covering all of the latest tidbits of awesomeness that you want to read about. When she’s not writing, she’s either making messy art, going on long adventurous walks with her camera, or poking around over at bohemianizm (http://www.bohemianizm.com/). You can find out about Desirée O and her work at http://DesireeO.com/ or follow her on Twitter @DesireeO.
Awards Shows
Pop Culture
Awards Shows Controversy VMAs
More From Pop Culture