The Wildest Celeb Outfits at the 2018 MTV VMAs 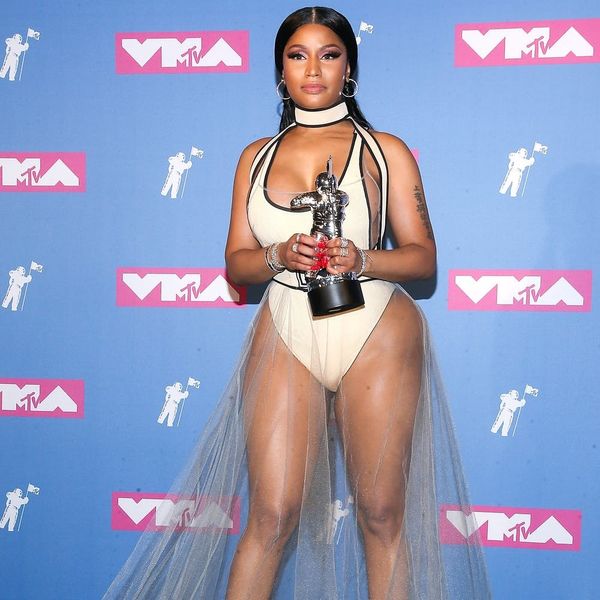 It’s one of music’s biggest nights of the year, and we always look forward to checking out the red carpet fashion at the MTV VMAs. Celebs bring out their wildest looks to grace the MTV carpet, and this year was no exception. These were the craziest VMA red carpet looks of 2018, from Amber Rose’s Halloween-inspired getup to Rita Ora’s risky gown.

1. Jennifer Lopez: It was perhaps the biggest night for J.Lo as she made Video Vanguard history by being the first Latin artist to win the prestigious award. She donned four gilded and glittery looks throughout the evening in celebration, but it’s this belted, beaded, strapless dress with a peacock skirt that turned heads… and ruffled feathers. (Kevin Mazur/WireImage)

5. Nicki Minaj: It was a huge night for Minaj as she performed a medley from her new album, Queen. She brought her fierce fashion out in full force, rocking a daring one-piece look with a sheer train, which she nearly tripped over as she made her way to the stage to accept her award for “Best Hip Hop,” before pal Ariana Grande saved the day. (Paul Zimmerman/Getty)

7. Dascha Polanco: We know the naked dress trend is going nowhere on the red carpet, and we love the OITNB star’s ethereal, flamenco-inspired take with dramatic eye makeup. (Nicholas Hunt/Getty)

Which wild fashion moment did you love most from last night’s show? Tweet us @BritandCo.

Arielle Tschinkel
Arielle Tschinkel is a pop culture junkie who went to NYU because the Olsen twins went to NYU (really). She is a freelance writer whose work has also been featured on HelloGiggles, Refinery29, SheKnows, Bustle, Hollywood.com, and many others; and she's living her dream one Britney Spears GIF at a time. Follow her on Twitter @mrstschinkel or visit her website at arielletschinkel.com.
Celebrity Style
Celeb Style
Celebrity Style Fashion Inspiration
More From Celeb Style