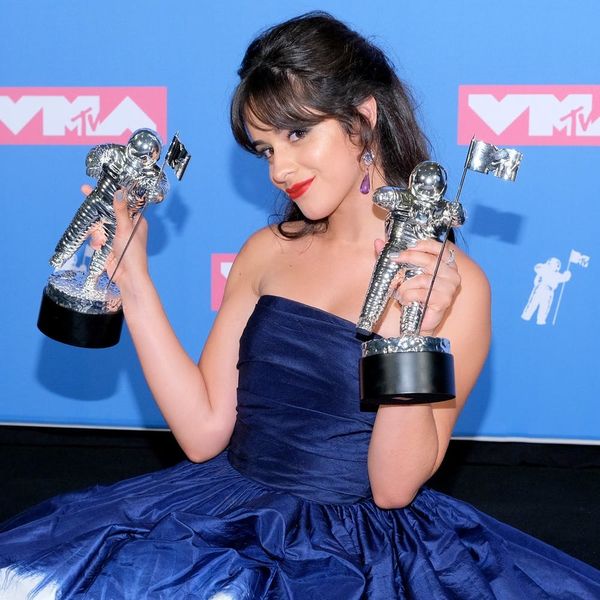 Camila Cabello capped off a massive year in her solo career with two 2018 MTV VMAs on Monday, August 20. After the show, she sent an adorable message to her younger self in disbelief.

“YOU’RE NOT GONNA BELIEVE THIS SMOL CAMILA BUT: IN 2018 MADONNA IS GOING TO GIVE YOU AN AWARD FOR VIDEO OF THE YEAR AND YOUR ACNE WILL CLEAR,” the singer tweeted to herself. What made the inspiring note even better was that it accompanied a tweet the “Havana” singer wrote six years ago.

“#VMA2012 I wanna be there SOOOOOOO bad you don’t understand,” Cabello, who would have been 15 years old at the time, tweeted in 2012. She hashtagged that she would be on the awards show stage “#someday.”

YOURE NOT GONNA BELIEVE THIS SMOL CAMILA BUT: IN 2018 MADONNA IS GOING TO GIVE YOU AN AWARD FOR VIDEO OF THE YEAR AND YOUR ACNE WILL CLEAR https://t.co/H8IbhaA2EO

This year, Cabello was nominated for five Video Music Awards, and took home two of the top prizes — Artist of the Year, and Video of the Year for “Havana,” which was the award given to her by Madonna. It was clearly a meaningful moment for the pop star, who said after receiving the award that her hands were shaking.

What do you think of Camila Cabello’s tweet to her younger self? Let us know @BritandCo!