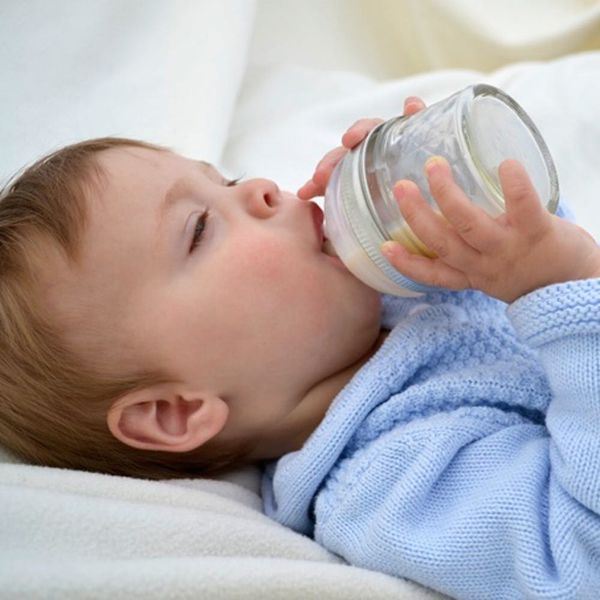 Nothing gets us in the DIY spirit like a good Mason jar project. They’re so versatile that they can actually be used hundreds of ways. Now even your little ones can take advantage of the amazing, all purpose container. The Mason Bottle is a silicone nipple that transforms the jars you have at home into an affordable glass baby bottle. The simple insert fits on four- and eight-ounce wide-mouth jars.

The product’s founder, Laura Belmar, got the idea when she was pregnant. She had just moved to a tiny San Francisco apartment when she and her husband learned their son was on the way. The couple was tight on money and they were concerned about exposing their baby to the harmful chemicals in plastic.

“I saw that a lot of mommy bloggers stored their breast milk in Mason jars,” she said. “I thought it would it be convenient to put a nipple on the jar where it’s already stored.” After considering expensive glass baby bottles, she was surprised that an eco-friendly alternative using the durable jars didn’t already exist.

The bottle has excellent milk flow — which is important for preventing gas and indigestion — that was modeled after the valves in the human heart. For an added storage bonus, the nipples can also be inverted in the jar and sealed. “We didn’t have a lot of room around the apartment for dedicated baby things, so to have his bottles up with the rest of the Mason jars was really helpful,” Belmar said.

The product’s Kickstarter campaign launched on November 2. Once fully funded, a two-pack of nipples will retail online for $10 or less. Until then, she’s offering her bottles as an incentive to supporters of the campaign. If you don’t have an infant in your life, she’ll donate the product to The Homeless Prenatal Program (HPP), which supports families and children in the Bay Area.

What are your fave space-saving tricks for kids? Tell us in the comments below.

Ashley Mason
Ashley is a freelance lifestyle writer based in Brooklyn. Since 2009, she has been drinking her way through the city’s diverse coffee shops. When she’s not hunched over her laptop, she can be found trying new restaurants and playing with her Beagle mix Signe.
Kickstarter
Moms
Kickstarter