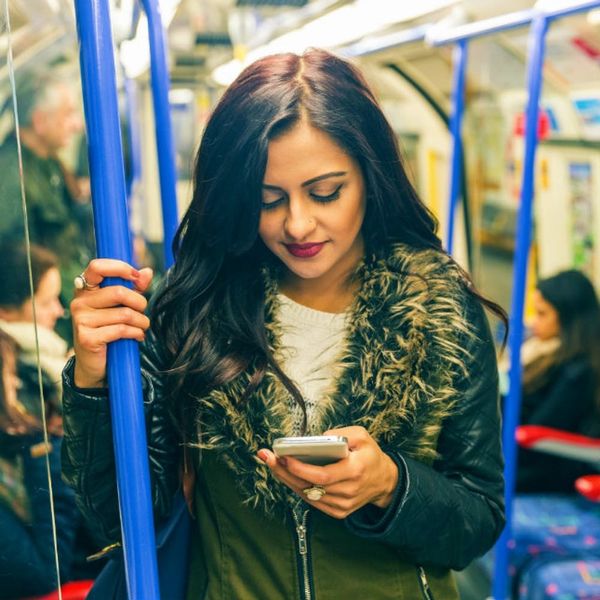 As much as online dating apps have created new opportunities for us to connect with potential love interests we may never have crossed paths with IRL, there’s still something to be said for old school methods of meeting a new crush. If you’ve ever locked eyes with a cutie while walking your dog or swapped smiles with someone while waiting to order a drink, you know the truth: Making a virtual connection does lack that special sense of spontaneity and playfulness.

Singles say emphasis on apps in the dating world has made it more difficult to meet people IRL (hello, cute guy on bus swiping on Tinder but won’t look up). In response, Match.com is handing control back to people looking for love with a new feature called Missed Connections, which uses hyper-location technology and matching algorithms to help users identify potential matches whose paths they’ve crossed. In the app, you can opt into Missed Connections and use it to browse through a feed of other members that’ve recently been in a similar area and still meet your usual matching criteria.

“Location and proximity are natural icebreakers,” says Bela Gandhi, Match’s dating expert and the founder of Smart Dating Academy. “Match is just using technology to do what people want to do naturally — which is to meet in real life. Having the opportunity now to connect through the places and things they enjoy will give singles an advantage to discover new people and connect more than ever through their interests.” Having something in common with a match definitely makes for more long-term potential, or at least a way less awkward first date.

Users in the beta testing phase in San Francisco and Dallas loved Missed Connections. They also got real results. More than two-thirds of Match users in those cities opted into the feature, and once they’d started using it, they were involved in twice as many conversations than they had been previously.

The great news is that the geographic focus of Missed Connections hasn’t replaced Match’s matching algorithm — it’s just added an extra layer on top of it. People who are matched using the new feature will still share interests and values and (hopefully, once they meet IRL) be attracted to each other. They’ll also find a little extra commonality in their communities, hobbies and favorite spots.

Although Missed Connections does use your location as part of its process, there are safety measures in place to ensure that you and your potential matches aren’t getting a little too familiar with each other’s spot on the map. The feature doesn’t provide real locations in real time. Instead, it tells its users just enough about where they’ve recently been with people they might like so that they can strike up an easy convo or start looking for a familiar face at the coffee shop.

“I’m hopeful that features like this that incorporate a slice of ‘our real lives’ will bring singles more success,” Bela says. “People aren’t coupling up faster or more frequently because they feel that a better person may be just a swipe away. Singles are craving more from dating — and this is a great feature that allows people to find missed connections that might be perfect for them… and maybe right down the street!”

What do you think about the new Missed Connections feature? Tweet us @BritandCo!